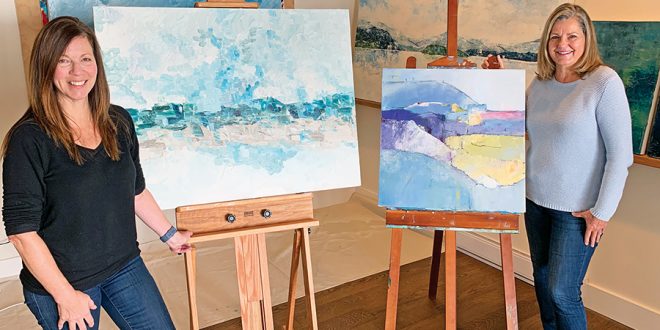 Posted by: The Local Weekly October 16, 2019 in Arts & Entertainment Leave a comment

This year marks the 10th anniversary of the Sunshine Coast Art Crawl, one of the most popular art events on the Coast that just keeps getting bigger and better. In 2018, 46,000 studio visits were recorded generating $500,000 of revenue that went directly to the artists. This year there are 186 venues to visit representing between 300-350 artists, so pre-planning is essential if you plan to try and visit them all.

There are 76 new venues. Some are familiar names who had taken a year are two off and are back, and some completely new venues, including the Gambier Community Centre (Venue #1) where 11 Gambier Island artists will be displaying their works in various genres including painting, photography and pottery. Chocolatier Sylvia Punguntsky of Art Meets Chocolate approached Crawl organizer Linda Williams about including Gambier Island in the Art Crawl. “What a great idea,” said Williams of the suggestion. “Now we’ve got an excuse to go there.” The passenger ferry leaves for Gambier from the Langdale Ferry Terminal with a crossing of 10 minutes and costs $13 return (cash only). From there, you can either walk or take the volunteer shuttle service to the community centre. 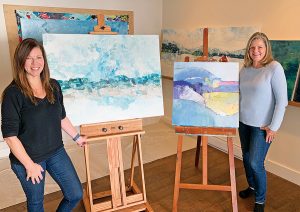 Cindy Ross, left, and Patricia Bowers are two of the four artists that will be exhibiting their work in High Beam Dreams in lower Gibsons during the art crawl. Photo submitted

Among other new venues are #9 photographers Craig Cochrane and Robert Dall, #30 Silver Moon Gallery, #102 MacGee Cloth Company, #105 painter Lucas Kratochwil, and #37 High Beam Dreams which is usually a performance and event venue. The space will feature the works of Bert Smulders, Olga Chnara, Cindy Ross, and Patricia Bowers, all first time Art Crawl participants. If you are a client of Olga’s Hair Stories, then you’ll know Chnara’s work as all the art in the salon was created by her. “Olga is good friends with Vineet (Miglani) of High Beam Dreams,” explains Ross. “They talked and Vineet offered High Beams [as a venue].” Ross and Bowers met on a painting retreat offered by long-time Crawl participants Marleen Vermeulen and Marlene Lowden. “About four years ago I was a Crawler,” says Bowers. “I went to see the show of their students. They were so excited and so proud. I was working in my studio by myself and I said, ‘I need that.’ I signed up and went on the retreat. I’ve been painting ever since.” All four artists presenting at High Beam Dreams are painters with both Ross and Bowers using oils to paint both abstract and representational themes. With this being her first major exhibition, Ross admits to having been nervous at first at the prospect. “But doing it as a group doesn’t feel so vulnerable,” she says. “I’m curious to see what resonates with people. For some people [the Crawl] is an important revenue generating weekend for them. I’m blessed that I don’t have to make that my focus. This is more from my heart.” Bowers also looks forward to debuting at the Crawl. “That’s the gift that this art crawl gives us,” she says. “The opportunity to share our artwork.”

The Sunshine Coast Art Crawl runs Friday, Oct. 18 to Sunday, Oct. 20 from 10am to 5pm with select venues open Friday night 7-9pm. For complete information, including a list of venues and map, visit: suncoastarts.com/art-crawl.