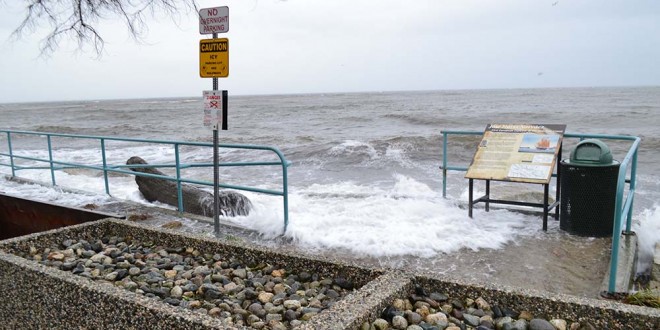 A “new beach” at Davis Bay?

Three million dollars is the estimated price tag for “beach nourishment” at Davis Bay to prevent flooding of the highway and nearby low-lying properties, according to a study by SNC-Lavalin Ltd. presented to Sechelt Council on May 18.
The study, requested by Council in October 2015, suggests piling 47,300 cubic metres (m3) of gravel or 46,600 m3 of sand to build up the beach slope above road level between Mission Point and Davis Bay Road. Winter storms have caused flooding and highway closures in that area several times in recent years.
John Readshaw, manager of the Coastal Engineering Group at SNC-Lavalin, stated:  “Our mandate was to evaluate the technical feasibility. This concept is technically feasible at this location.”
The report notes that although sand would provide a more attractive beach for residents and tourists, some sand would be lost every year, so the beach would have to be replenished at five to ten year intervals.  A gravel “beach nourishment” option would be more stable.
“All we’re doing here is really accelerating nature,” said Readshaw.  “The material on the beach is beach material, it’s not rocks, it’s not sea wall, it’s not concrete.”
He also pointed out that the proposed project is scalable and could be phased, starting with a pilot project since “models are not completely perfect.”
Mayor Bruce Milne described the $3 million capital cost as “daunting”, but also suggested the project could be “audacious in a positive sense” and “transformative” in terms of recreational potential.
During the public question period at the end of the meeting, local residents raised concerns about possible environmental impacts.
Dianne Sanford, representing the Sunshine Coast Friends of Forage Fish, pointed out that the report did not include a biological assessment of the area.  She said that the west side of the beach beside the estuary is a spawning habitat for fish such as sand lance that are a cornerstone of the marine food web.
Jason Herz, representing the Sunshine Coast Conservation Association, also raised flags.
“It would be really nice to have a beach on the one hand, but the Conservation Association has a lot of concerns about it moving forward that there would be a process to ensure that environmental values are not lost.  There could be unintended consequences if you put a lot of material on there.”
He noted that the low tide zone includes sea grass and eel grass that are important for herring spawn and that the estuary is an overwintering area for seabirds.
Other concerns raised included the possibility that a high berm would block ocean views, and that the report did not take into consideration sea level rise caused by climate change.
The report will be considered by Sechelt council during their upcoming strategic planning process.
Donna McMahon