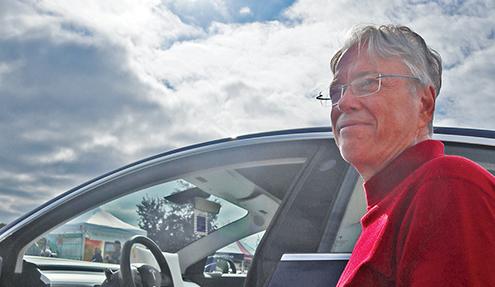 An electric Tesla with hand controls 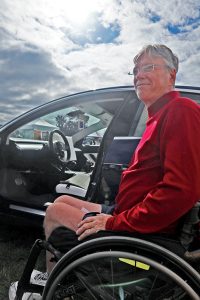 Jacques Courteau showed off his customized, hand-controlled Tesla at the Electric Vehicle Festival Sept. 21. He thinks Tesla will become the vehicle of choice for the physically disabled. Connie Jordison photo

In one year of ownership, the Lower Mainland’s Jacques Courteau has put over 40,000 kilometers on his Tesla Model 3.  He added a few more with a visit to the Sunshine Coast Electric Vehicle Association’s fifth annual Electric Vehicle Festival on Sept. 21 in downtown Sechelt.

Courteau’s was one of a handful of the all-electric powered four-door Tesla sedans at the event.  None of these vehicles have standard instrument panels.  Their speedometers and other gauges are integrated into a central touchscreen. Features that made Courteau’s car stand apart from the others were hand driving controls instead of a floor mounted accelerator and brake. Necessary, as he is paralyzed from the waist down.

An avid promoter of electric vehicles, Courteau has no interested in going back to a fossil fuel powered vehicle.  He has taken is Tesla to a number of display events to show how the technology integrated into the vehicle can be a boon to drivers with mobility issues.

“This car has everything it needs to become self-driving,” said Courteau. “I believe it will become the car of choice for people who cannot currently drive due to their physical abilities. Tesla drivers will soon be able to turn on their vehicle’s global positioning system, program in a destination and the car will take them there.  Their physical abilities will not impact their ability to travel on their own in the vehicle.  It will not even matter if you are sighted or blind.”

The range on Courteau’s performance model Tesla is over 450 kilometers.  He took a 24,000-kilometer road trip throughout North America this summer.  He said he faced no issues in travelling between destinations on a single charge and always found two or three locations available for recharging when it was needed.

Courteau has been paralyzed from the waist down for just over 10 years.  His spinal cord was damaged in an accident after he lost consciousness due to extreme heat while driving his motorcycle.  He does not relate his misfortune to is long time passion for driving performance cars and high-powered motorcycles. “It wasn’t a motorcycle crash, it was a mishap that occur on a motorcycle,” said Courteau.

This motor sport enthusiast had to take matters into his own hands to convert his new car to meet his needs. “There was no assistance from the Tesla company in converting the vehicle.  I had to find my own ways to install the hand controls, which was much different that it was with the BWM vehicle that I had purchased previously,” said Courteau.  A major challenge was modifying the accelerator and brakes which were originally mounted on the vehicle’s floor, as the batteries that powered the car were located immediately below them.