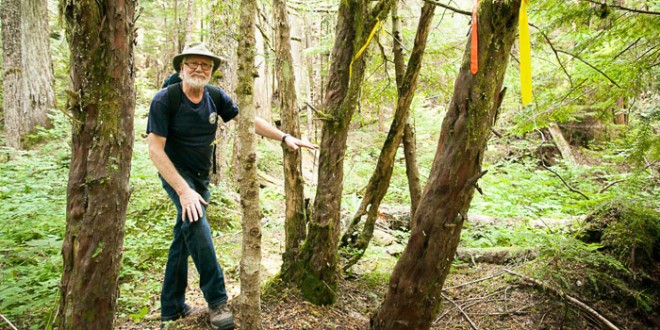 Local environmental groups are calling on the BC government to establish an ecological reserve on approximately 15 hectares of endangered old-growth forest located on public (Crown) land at the headwaters of Roberts Creek. BC Timber Sales (BCTS) has applied to log DK045, the mid elevation old-growth yellow-cedar forest, located about seven kilometres northeast of Roberts Creek village. The group contends the forest’s proximity to Highway 101 makes it a high potential eco-tourism destination. With the sale of the block delayed until March, 2014 as BCTS awaits the results of an ecological and cultural survey by Ministry of Forest researchers.

“The proposed cutblocks, located between two designated Wildlife Habitat Areas (WHAs) created to protect threatened Marbled Murrelets, would split this habitat in half,” stated Ross Muirhead of Elphinstone Logging Focus (ELF), a Sunshine Coast forest protection group. “BCTS Planners must acknowledge that connectivity of existing WHAs is an important land-use objective and protect it either as a WHA extension or better still as an ecological reserve.”

The cutblock, located on Squamish First Nation traditional territory, falls within the area known as the Roberts Creek Headwaters Ancient Forest. The cutblock was first put up for sale in 2010. In July, 2012 after receiving photos from ELF members of what appeared to be culturally modified trees (CMT) within the block, the Archaeological Branch of BC requested the sale be halted. Professional archaeologists Jim Stafford and John Maxwell, contracted by ELF, visited the site in 2013 and confirmed the existence of 17 CMTs within the block. After the Archaeological Branch mapped out seven protected Archaeological Sites within the proposed cutblock, BCTS then applied for, and was granted, a ‘site alteration permit’ to cut down the CMTs.

Subsequently, ELF identified an exceptional stand of over 350 old-growth dependent Pacific Yew trees growing near the bases of yellow cedars. Gary Fletcher, of the Friends of Ecological Reserves, visited the site and nominated the Roberts Creek Headwaters Ancient Forest to the government as an Ecological Reserve to highlight this outstanding example of the old-growth dependent Pacific Yew.

Ancient Forest Alliance campaigner and photographer T.J. Watt states “This forest is regionally important to the Sunshine Coast. The BC government must set aside this forest and stop all logging of rare, endangered old-growth forests across the Province.”