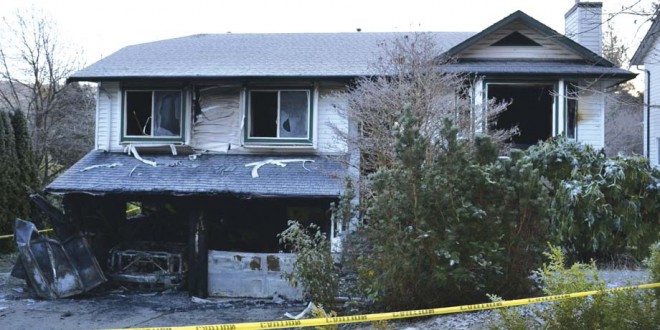 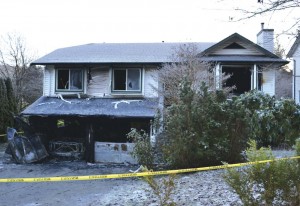 This house on Reef Rd. in Sechelt was heavily damaged in what police believe was a deliberately-set fire on Dec. 2. RCMP Photo

Police continue to investigate after being called to a house fire at 5812 Reef Road in Sechelt shortly before 4 pm on December 2. The Sechelt Fire Department called RCMP after getting reports of a fully-engulfed house fire.

After further investigation by the Fire Department and an RCMP arson investigator, police believe this fire was deliberately set said Cst Harrison Mohr with Sunshine Coast RCMP. The fire gutted most of the upper floor of the home, the garage, and a vehicle in the garage. This was a large and intense house fire that not only caused extensive property damage, but needlessly risked the lives of fire fighters and other emergency responders. As such, we are taking this criminal act very seriously. Police are confident this was an isolated incident, specific to that residence.

Police ask anyone who saw anything suspicious around the time of the fire to call the RCMP if they have not yet been spoken to by police. We would like to speak with anyone who saw any persons going to or leaving the residence before or after the fire started, or anyone that knows who was living at or staying at the residence. Police reinforce that in a case like this, even the smallest detail can be of great assistance.  Call Cst Harrison Mohr with the General Investigations Section, at (604) 885-2266.