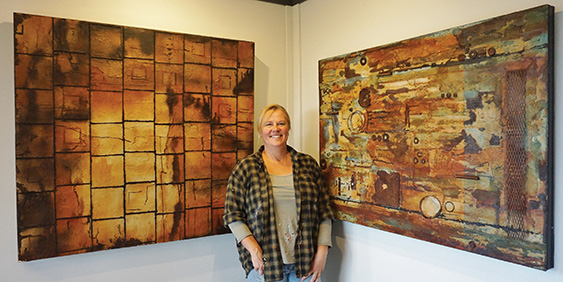 Posted by: The Local Weekly October 18, 2017 in Arts & Entertainment Leave a comment

The Sunshine Coast Art Crawl takes place this weekend, October 20-22, with over 330 participating artists representing a wide variety of media and styles. Crawlers will need to arm themselves with the Art Crawl brochure or app in order to plan out a methodical route if they hope to take in all the 144 venues, 51 of them new for 2017. One artist who will be participating in her fifth Crawl is visual artist Donna Stewart. She will be exhibiting with fellow artists Charly Mithrush and Lore Schmidts (venue 91).

Stewart, a self-taught artist, started her creative journey with papermaking and pottery. She moved to the Coast in 1999 and opened a small gallery called Anchor Rock next to the Halfmoon Bay general store. It was a labour of love, and while the gallery stayed open only four years, it connected Stewart to the Coast’s arts community. “I met Charly who came and helped with the gallery,” recalls Stewart who had painted the gallery’s floor to look like tile. “She said ‘why don’t you take up painting?’ You seem to have this knack,’ so I went up one day to her studio and started painting.” It wasn’t until a happy accident during home renovations that Stewart found the medium that truly excited her. “Some concrete spilled on a board and I remember going, ‘hey that might be kinda cool.’ It was something different.” For the past 10 years, Stewart has been honing her technique through “lots of trial and error” and is now using nine different types of cement and 14 different colours of acid stains to “paint” her unique concrete
canvasses. 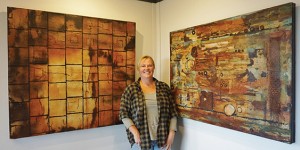 Donna Stewart poses with a pair of her acid-stained concrete “paintings”, which you are encouraged to touch. She will be exhibiting at venue 91 on the art crawl. Anna Nobile photo

Part of that trial and error was finding a way to make the finished pieces light enough to hang. She’s now working with Roadhouse Kustom Metals who make the frames according to her specifications. She then chooses a cement based on its properties, applies approximately a quarter inch of concrete to a board and uses the acid stains to create her abstract designs. Though that process may sound fairly straightforward, it’s anything but. “It’s like pottery,” says Stewart. “It might crack, it might break, the glaze doesn’t turn out the same way. With paint, if you don’t like the way it turns out, you paint over it. Concrete is a lot more work.” Though she approaches a canvass with an idea in mind, things don’t always turn out the way she planned. “I like the ‘I don’t know,’” she says. “When it starts to ‘go’ and the acid stains are going, then it’s really fun.” Many people who view her pieces don’t realize they are looking at work done in concrete. “Everybody wants to touch them, which I encourage,” she says. “That’s the curiosity. ‘Is that paint? What is that?’ Then you’ve captured them.”

Stewart’s work will also be on display in the lobby of the Sechelt Hospital (venue 93) along with paintings by Kasia Krolikowska and First Nations artist Shain Jackson’s award winning mural. The Sunshine Coast Art Crawl runs Friday, October 20 to Sunday, October 22 from 10am to 5pm, with some venues open Friday night. Full details at: sunshinecoastartcrawl.ca.