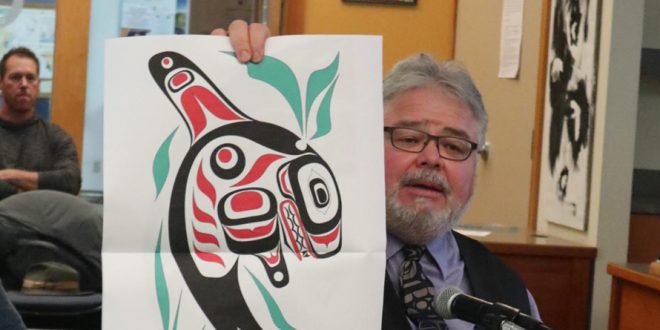 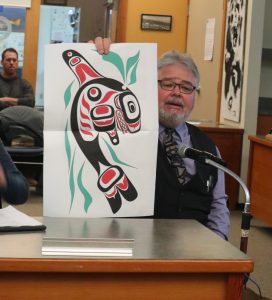 Conditional approval of a development permit for the proposed supportive housing project on School Road was authorized at the Dec. 3 Gibsons council meeting.  Council requested the project’s landscape plan include trees that will provide screening between the planned 40-unit apartment building and an adjacent single family property.  Permit issuance is also dependent on council endorsing official community plan and zoning amendments for the site. The planned BC Housing project will provide homes and programming space to help those at risk of homelessness, similar to the facility it opened on Hightide Avenue in Sechelt earlier this year.

In October, the town asked for changes to BC Housings’ original design submission.  Included were requests for timber frame and First Nation design elements to provide a more welcoming building entrance.

In response, the proponent added Kwakwaka’wakw nation artist Simon Daniel James to the project’s design team.  At the meeting, he presented options for building artwork and a totem at the site, based on designs with whale or raven themes.

Over the past 35 years, James, who also uses the name Winadzi, has been an internationally-renowned artist and carver. James trained at Vancouver Film School and is the co-creator of the animated “Raven Tales” series which airs on Aboriginal Peoples Television Network.

Councillor David Croal asked that the Squamish First Nation be consulted on the artwork, noting the project is located within their traditional territory and on a site that they consented to have transferred to the town for this use.  James noted that he has family and personal connections within the Coast Salish Nations including the Squamish, who he often works with.

James said he was willing to adjust the building colours to meet council’s request to move away from dark browns in favour of brighter colours. For the artwork that will be attached to the building, James has suggested using an applique over recycled plastic lumber.  Along with being more weather resistant and easy to maintain, the incorporation of recycled material would recognize that Gibsons was one of the first BC communities to embrace recycling.  It would also reflect the ongoing commitments to sustainability that are included in the town’s strategic plan.

As the exact design of the artwork is not an integral part of the form and character of the building, the development permit can proceed while those decisions are being finalized.  Council referred the proposed exterior artwork for the building to its planning and development committee and to the Squamish First Nation.

2019-12-11
The Local Weekly
Share !
Previous: Final decision on bollards delayed
Next: RCMSAR and other first responders are here for you this holiday season