Posted by: Editor May 24, 2016 in Arts & Entertainment, Local Community Leave a comment 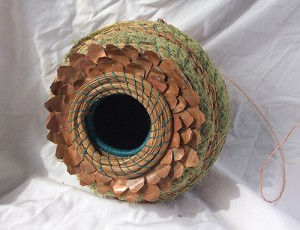 A basket by Kim Hadley, one of the eight artists featured in Refraction: Queer Artists of the Sunshine Coast. Photo submitted

Hadley, a basket maker, looks forward to the show’s opening. “The idea of spotlighting queer artists on the Coast really spoke to me,” she says. Cochrane, who focuses on portraiture, agrees. “To put on display something that brings me happiness and put it in front of others like myself, as well as others in our community, that’s something I’m proud of,” he says. Both see Refraction as an opportunity to not only connect with other queers and artists, but with the community at large, which in essence, is the purpose of the exhibit: to break down barriers and bring people together.

Cochrane’s photographs are inspired by burlesque performers. “They are celebrating themselves and their own sexuality,” he says. “For me the expression of sexuality, the expression of self in front of other people, stems from growing up as a gay person,” he says. “A lot of the life experiences I’ve had are because I’m gay. They’ve defined me.” Hadley, on the other hand, whose works are made from natural materials she collects on her walks, is inspired by nature. She recognizes that her sexuality has a lesser role to play in her art. “It affects who I am in the world and that in turn affects my art, but my art doesn’t have a queer identity. I do.” 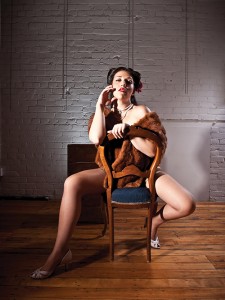 A photograph by Craig Cochrane, one eight artists in an exhibition called Refraction: Queer Artists of the Sunshine Coast. Cochrane says his photographs are inspired by burlesque performers, and calls this one “Tea With Mussolini”.

When asked about the use of the word queer, both acknowledge it might leave some uncomfortable, but both are proponents of its use. “It’s about the connotation and the tone,” says Cochrane. “Our society uses it to define someone who is different and being different is actually a good thing.” Hadley finds the word queer more inclusive. “Lesbian, bi, trans. Those are strong labels that may not fit everyone. Queer is a broader spectrum.”

Ultimately, Refraction is about the art and the people who made it, of sharing the beauty of creative expression as well as diverse points of view. It’s an opportunity to celebrate, to explore how we are different, but also acknowledge the common bonds that unite us.
Refraction runs at the Sunshine Coast Arts Centre in Sechelt, June 1-July 3. Opening reception June 1, 7-9pm. All welcome. A series of programmed artists’ presentations begins June 4 at 1:30pm with Craig Cochrane giving a talk on camera basics. More information at www.facebook.com/refractionsc