Posted by: Admin August 19, 2020 in Local Community Leave a comment 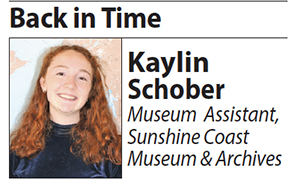 Crowe Road Commune, Funny Food Farm, and Sugar Mountain Commune are just some names of the groups that populated the Sunshine Coast in the early 1970s. This may not come as much of a surprise as many of us are familiar with the Coast’s countercultural attitude; however, 1971 is the most notable year in the history of these communes because, for a short period of time, they were funded by the federal government.
Unlike the emergency government funding we’ve all become familiar with during the reign of COVID-19, the people of the 70s were faced with an entirely different pandemic: restlessness among youth. To remedy this, and the growing youth unemployment rate in the country, Opportunities For Youth (OFY) was created. These grants were unique because they were given to projects that were created for and by the younger generations. The program received criticism for many reasons, including supporting projects which some found to be too controversial. Underground newspapers, drug counselling services, and communes are just some examples of the ideas which received funding. British Columbia had 30 of these subsidized countercultural groups, half of which were located on the Sunshine Coast. At the foundation of these communes was the idea of self-sufficiency, and exploring alternative lifestyles. The phenomenon received international attention when a New York Times journalist was sent to the Coast, noting that the communes consisted of smaller groups of 3-10 people and that many were without electricity and running water. One of the harshest critics of this program was Wallace Peterson, the Mayor of Gibsons at the time. In an interview with the Vancouver Sun, he stated that “to support a bunch of American hippies … isn’t the purpose of the OFY program. They’re using the money to learn how to grow pot – I don’t think you’ll see a single potato growing on any of these communes.” His suspicions were put to the test on June 21, 1971, when the RCMP raided these grant recipient groups, only to find nothing. Documentation on the final success of the communes is
limited.
The experience of living through a pandemic has changed many individuals’ perspectives regarding the sustainability of our current ways of living. There are also interesting parallels to recent criticism of the CERB program used to support unemployed Canadians at this time. Although we aren’t quite headed toward another government-funded commune craze yet, it may not be a bad idea to learn about ways to become more self-sufficient.
Special thanks to Matt Cavers for research notes

2020-08-19
Admin
Share !
Previous: Books and Beyond
Next: Feeling disconnected