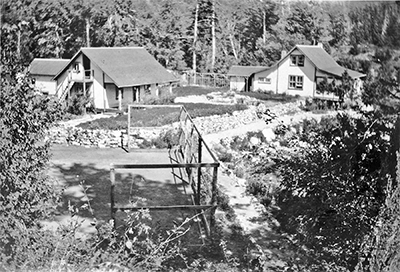 Posted by: Admin March 17, 2021 in Local Community Leave a comment

The Brynildsen family
Mattie-Marie Hammer and Brynild Brynildsen were part of the original group of Norwegian settlers who arrived in Bella Coola in the late 1890s and were given land grants by the BC Government to start a colony. Soon after arriving in Bella Coola, they got married and started a family, and by 1913 they had six children.
Brynild was very entrepreneurial. He owned the B. Brynildsen and Company general store in Bella Coola, the Bella Coola Colonist newspaper, the Palmer Hotel, and was also very active politically. In the early 1900s, he even devised a scheme for issuing tokens as a form of legal tender for use by the fur traders, miners and prospectors who stocked up with supplies at his store.
Sometime in the late 1920s, the Brynildsens decided to move to Pender Harbour. They bought a large block of land at the head of Garden Bay from Henry Darling, who owned most of the land in that area. No one is quite sure why they chose Garden Bay or the reason for this move, but most probably, Brynild saw an opportunity to expand his business interests.
By 1928 the Brynildsens had built a house, a café, badminton courts and the Garden Bay Store on their waterfront property. The large store was built on the narrow isthmus at the head of the bay (the Royal Vancouver Yacht Club outstation now occupies this site). But, unfortunately, as the entrance faced into Garden Bay, it didn’t do very well as most of the local population lived on the other side and had to travel around Garden Peninsula by boat to get there.
In the early 1930s, the Brynildsen’s house was converted into the Garden Bay Hotel (the current Garden Bay Hotel still occupies this site). Oddly enough, it was one of the few hotels in BC that had no guest rooms attached. The first application for a beer licence for the hotel appeared in the October 22, 1932 issue of the Vancouver Sun under the name of the Brynildsen’s eldest son, Birger.
Brynild Brynildsen was a hard-working man of many talents. As well as building his home, store and café, he also built what Robert Ripley described in his “Believe It Or Not” feature as the “shortest government-owned road in the world.” It ran along the northeast side of the lagoon from his store to the government wharf in Hospital Bay and was less than 100 yards long. He also created many trails through the neighbourhood and to the nearby lakes, organized teams for softball and other games and taught the locals how to play ice hockey on Garden Bay Lake.
In 1930 the logging and fishing community in Pender Harbour decided that a hospital needed to be built in the area, and Brynild Brynildsen has been credited with donating several acres of his land upon which the hospital was to be built. However, the land Brynildsen had so kindly donated was actually on the adjoining property, which still belonged to Henry Darling. When Darling realized what the community was trying to accomplish, he relented and deeded the land for the first St. Mary’s
Hospital.
The Brynildsen family remained in Garden Bay until the mid-1930s when they sold up and moved back to Bella Coola.
Carol Howie, Pender Harbour Heritage Living Society