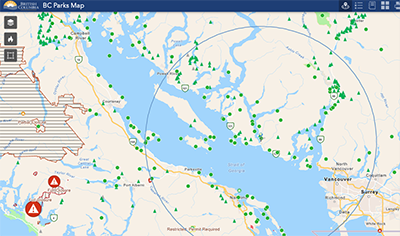 BC parks may see increased funding

BC’s Budget Committee has recommended increased funding for BC parks.
Last Friday, the Select Standing Committee on Finance and Government Services, the Budget Committee, released its Report on the Budget 2021 Consultation. The Committee recommends to:
Increase operational funding for BC Parks and Recreation Sites and Trails BC to support staffing, monitoring and enforcement, maintenance, land management planning, oversight of public health and safety, and recreational infrastructure and services, including promoting and supporting volunteer efforts.
“We are thrilled to see this recommendation from the bi-partisan Budget Committee, which recognizes the deep need for system-wide upgrades to BC’s beloved but beleaguered parks,” says Tori Ball, Canadian Parks and Wilderness Society – British Columbia (CPAWS-BC) terrestrial campaigner. “Decades worth of underfunding is catching up with our parks, and the cracks in the system are showing.”
The BC Parks budget remained stagnant for decades while the system grew in size, and demand for outdoor experiences soared. Compared to the 1980s, the BC Parks budget and staffing levels have suffered a 90 percent decrease. The agency’s budget saw a modest increase after the BC Parks Future Strategy was released in 2016 yet fell again in the recent 2020 budget.
“The BC government has added $8.1 million this year as part of their efforts to address increased use during the pandemic, but this cannot cover the years of neglected infrastructure, unmonitored illegal activities and overflowing parking lots that have plagued the system for over a decade,” explained Ball. “Parks and protected areas are seeing a record number of visitors this year, and this is only from domestic tourism. We need to fix these problems before international tourism returns, and we have to shut areas down because we didn’t prepare for the additional pressure.”
CPAWS-BC recommends that the BC Parks budget be increased by $60 million.
Submitted