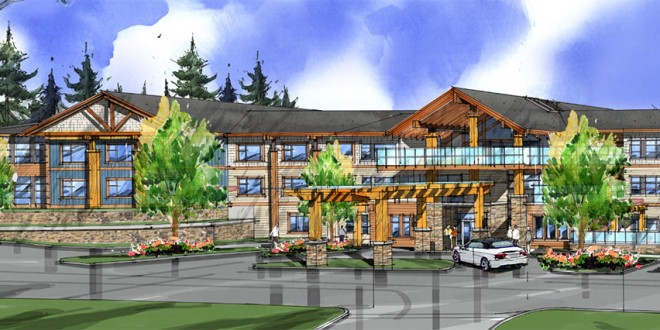 Sechelt council adopted the official community plan and rezoning amendments for the Silverstone Care Centre.
The proposal for this privately run senior’s long-term care home, operated by Trellis Seniors Services on behalf of Vancouver Coastal Health, was introduced to the community in 2016. From the onset, local group Protect Public Health Care lobbied against the project that would replace publicly administered care currently being delivered at Shorncliffe and Totem Lodge with a new “operated for profit” facility.
Over the next four years, Trellis adjusted its plans several times. It began with a focus on locating in Sechelt. It then considered sites in Gibsons and on shíshálh Nation lands before returning to site its proposed facility on Derby Road and Cowrie Street in West Sechelt in 2020. When the required amending bylaws proceeded to public hearing in July of that year, Trellis announced that the hospice facility it had planned to include would not be proceeding, as the Sunshine Coast Hospice Society had decided to move in a “different direction.”
The zoning amendment endorsed by Sechelt council on Jan. 20 authorizes 136 care rooms on the property. Hospice operations remain a permitted use under the new zoning of the site. Upon adoption of the bylaws, Mayor Darnelda Siegers stated, “I am looking forward to seeing this development moving forward.”
Trellis’ website indicates it hopes to open the facility in 2022.
Connie Jordison