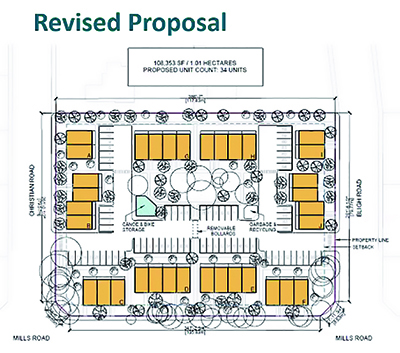 Westcor Lands is reducing its proposed Mills Road development to 34 multi-family residential units. Its original request was for 44 units. Sechelt council received a staff report and a delegation from the developer regarding the change at its March 17 meeting.

Bruce Mason from Westcor and project architect Nicholas Waissbluth explained that following community consultation on the proposal, Westcor adjusted the number of units and the setbacks of the development from Christian, Bligh and Mills roads in West Sechelt. The updated proposal includes duplex, tri-plex and four-plex structures on the one-hectare site. Waissbluth noted that Westcor had signed a letter of intent with BC Housing to include five units in the development as part of an affordable rental housing initiative.

Westcor is continuing with plans to include secondary suites in approximately five of the residences. The exact number of lock-off suites to be included is dependent on the outcome of discussions with staff regarding on-site parking requirements for the development.

The changes squeak the new proposal under the maximum density allowed within the location’s existing land use designation by one unit. Therefore, no Official Community Plan amendment is required. The project requires re-zoning from R-3 to R-4 to proceed as planned. Sechelt council’s practice is to consider the scheduling of a public hearing of zoning amendment bylaws following the second reading.

Holl noted that should the project proceed as planned, it would be assessed $516,018 in District Development Cost Charges (DCC). He also estimated that an additional $85,425 DCC for water service would be payable to the Sunshine Coast Regional
District.

In another planning matter considered at the meeting, council declined to take action on an APC recommendation that Sechelt draw up definitive and legible variance application guidelines. Such applications are made when an owner wants to construct improvements that need the relaxation of requirements set out in the zoning of a property. Examples include requests for smaller setbacks or increases to lot coverage percentages. Sechelt’s procedure is to refer such applications to the APC for comment in advance of council consideration. The APC expressed the view that it felt that too many variance applications were coming
forward.

Rather than asking staff to create more documentation, council encouraged them to work with applicants to find alternatives, so that proposed projects meet lot requirements without variances. If that is not possible, council supported the right of an individual to submit a variance application. Each of these applications is to be considered on its own
merits.