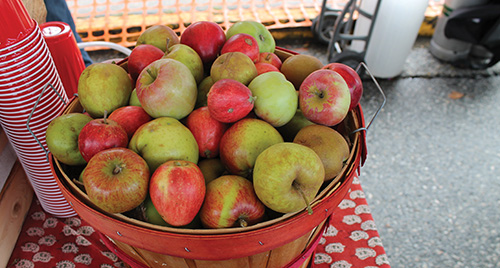 Cider: a libation with a long history

Across North American, craft cider is booming, but few people know the extraordinary history of the beverage.

Apple trees originated in Central Asia near the Caspian Sea, and travellers carried them along the Silk Route to Western Europe, where the Romans spread them as far as Britain. When Europeans reached the New World, they brought apple trees. The trees grew readily and produced abundant fruit that stored well and could easily be fermented into cider.

In the centuries before most people had reliable access to clean drinking water, alcoholic drinks were safer than water. In Europe, men, women, and children drank “small beer” and watered wine, and in North America they quaffed vast quantities of cider and “apple jack” (a concentrated liquor made by freezing cider). It’s no wonder that the iconic American hero Johnny Appleseed was so popular.

In the 19th century, cider production declined dramatically, mostly because of the temperance movement. By the late 1800’s, apples were so closely associated with drunkenness that supporters of the Women’s Christian Temperance Union attacked apple trees with hatchets and whole orchards were chopped down in the cause of sobriety. The Christian tradition that Adam and Eve were banished from the Garden of Eden for eating a forbidden apple did not help its reputation either.

In the early 1900s, apple growers were faced with a gigantic public relations problem, so they decided to reinvent their industry. They bred new varieties of very sweet apples for eating and hired a New York public relations firm, Mather and Crowther, who coined what may be the most successful advertising slogan of all time: “an apple a day keeps the doctor away.” Apples were reborn as the healthy, wholesome snack you feed your children.

Only in the last two decades have growers returned to heritage apple varieties and begun reinventing the ancient tradition of cider making.