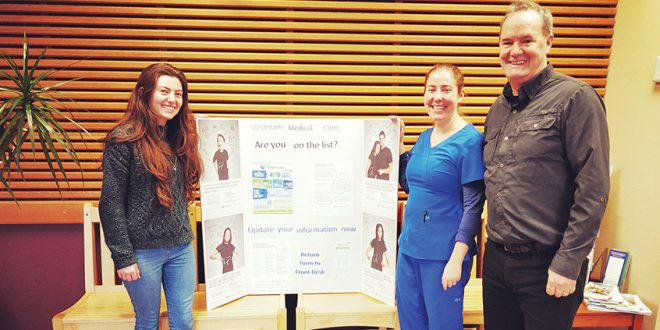 Patients visiting any of the six clinics on the lower Sunshine Coast will have noticed something similar at the front desks of each clinic over the past week as the #waitingroomchallenge has been rolled out. 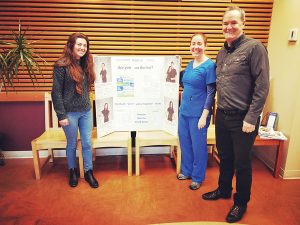 Mike Gojevic, right, with staff from the Upstream Medical Clinic in Wilson Creek, and the notice board inviting people to sign up right there to be an organ donor. After Dr. Paul Dhillon heard Gojevic describe his life after a lung transplant, the two of them developed a challenge that resulted in six Coast clinics competing to sign up the most donors. Photo submitted

“After a successful trial at the Cowrie Street Clinic in September and October last year we thought it was time to expand this project across the entire coast,” said Dr. Paul Dhillon. As a local GP, Dr. Dhillon had the idea to use the waiting rooms in his clinic as an opportune place to educate people about registering as organ donors after hearing a talk from Mike Gojevic, a lung transplant recipient, at the local Sunshine Coast – Sechelt Rotary Club meeting.

“It was incredible to really sit back and hear Mike’s story about how his life changed and continued on after his transplant”, Dr. Dhillon said. “I checked my own registration status after he mentioned that the old driver’s licence stickers were not valid anymore and there is an organization dedicated to transplant in BC. As a physician in the community I get to hear bits and pieces of patient stories but it was so moving to hear his story in depth. By chance I saw him in the clinic later and started talking about the idea and it’s grown into this great little challenge.”

There are currently more than 30 transplant recipients living on the Sunshine Coast and 638 British Columbian’s on waiting lists for a transplant; last year 29 British Columbians died while on the transplant wait list. “It’s a tragedy that people still die on waiting lists when 95 per cent of people in BC support transplant but are not registered and more importantly they haven’t discussed their wishes with their families and loved ones,” Dr. Dhillon said.

One organ donor can save up to eight lives and, interestingly, you are more likely to need a transplant than you are to become an organ donor.

Over the course of a month – from Jan. 14 to Feb. 14 – patients at the clinics can fill out the paper forms that update their registration status with BC Transplant or register for the first time. Forms are sealed and then physically collected and counted before being sent to BC Transplant for entry into their system. While people can register easily online, this challenge requires patients to fill out their forms in the office for them to count towards the final tally.

“It’s really a win-win-win situation,” said Dr. Dhillon. “Every single clinic on the Coast I contacted was on-board and excited to be a part of this project. It’s the first time something like this has happened in Canada and hopefully it catches on. It’s great for patients, doctors, and clinic staff to all get involved in something together with a bit of a fun challenge to see who can get the most sign-ups and updates.”

When the idea for the project was hatched between Mike Gojevic and Dr. Dhillon, they weren’t sure how well it would go. But after the trial at the Cowrie Street Clinic, BC Transplant was ecstatic with the initial results and keen to expand the program. The Rural Coordination Centre of BC has also provided funding for the project in order to assess its effect and benefits.

Said Dr. Dhillon: “We’re really excited about seeing how the month goes. At the end of the day we will have raised awareness of organ donation on the Coast and I think that in the end we will save lives and have more people living to see their kids graduate, to graduate themselves and to see their kids grow up. Opportunities that they wouldn’t have had if they didn’t receive an organ transplant.”