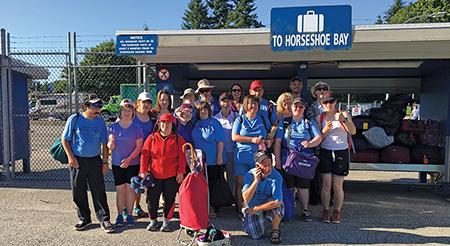 Posted by: The Local Weekly August 2, 2017 in Uncategorized Leave a comment

The past few months have gone by like a whirlwind: a wonderful walkathon raised nearly $20,000 for uniforms, equipment and travel; and then training for Provincial Games, travelling to Kamloops and the games themselves.

Cathy Verge, our head swim coach had this to say about her Orcas:

“Going to the Provincials with six athletes from our swim team to compete in their sport was an experience I am so happy to have been part of. You were chosen to represent your community, sport and your personal best times. I watched as you prepared for the games by working hard, committing to be your best, listening to your coaches and persevering. You were picked to go to Kamloops because of your abilities and you were ready when the Games came. Seeing you do so well at the Games was a moment of pride and joy for which all of you had worked so hard.” 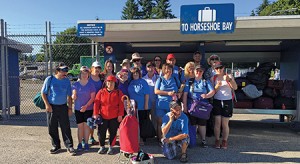 The Sunshine Coast Special Olympics team poses for a picture in Langdale on the way to the Provincial Games in Kamloops. Allyson Pearson photo

“Gus has been practicing hard for years to achieve his goal of winning a medal at the games. Gus battled extreme heat and fatigue during competition to keep himself in the middle of the pack of all the competing golfers. The final day of competition Gus was pumped and determined to give it his all and was rewarded with a gold medal.”

“It was such a great experience going to the games. Amber was ready and in high spirit to take on all challenges. She faced them all with a winner’s enthusiasm. Bruce’s passion for running was driving him forward to do his best and he did. The heat and smoke did not hold either of them back. I am so proud of them and everyone on the Sunshine Coast team.”

“Sunshine Coast bocce had the best cheering section of any team. I’m sure they helped us win gold.”

Rythmic gymnastics head coach Grace Gardner was unable to provide a comment but her athlete, Linsey Davidson, won two bronze medals while Grace was otherwise engaged as the medical liaison officer. Grace is still otherwise occupied but this time it is fighting fires in our province.

Although Ravens head softball coach Randy Younghusband did not travel with athletes Chris Walker and Amanda Boghean, his dynamic coaching ensured the gold medal performance these athletes displayed alongside the Vancouver Go-Go’s team.

Finally, on the way to Kamloops, Region 5 coordinator Darren Inouye gave each of our SOSC athletes a beaded bracelet with a heart and the initials A.B. for us to wear at the games in memory of Annette Bertrand. Our beloved program coordinator who passed away in January will be remembered at an “old fashioned” picnic in Porpoise Bay on Saturday, August 19.

See you all for registration in September.