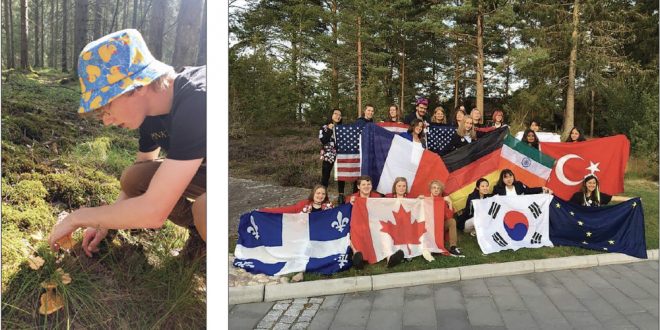 Posted by: The Local Weekly December 18, 2019 in Local Community Leave a comment 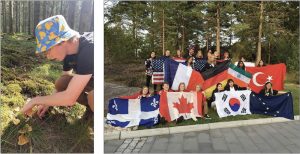 Sunshine Coast student Matthew Drope is living in Sweden for a year on a Rotary youth exchange program. Matthew is seen at left, and at the right end of the Canadian flag. Photos submitted

Grade 11 student Matthew Drope has moved to Sweden for the next year as the selected Rotary Youth Exchange student from the Rotary Club of the Sunshine Coast. He is living in a small town south of Gothenburg in the town of Kållered.

Attending school takes 40 minutes by train in the mornings where he is studying in a Nature Science program that includes heavy doses of science and math and so far it seems that the Swedish students are a fair bit more advanced, but learning to do math and science in the Swedish language is an added hurdle.

While learning the language, Matthew reported in October that he was at the point where he can’t speak that much but he found that “I have found myself speaking much less and listening much, much more. This is an interesting experience. Having to listen more has taught me so much about people. In a way, it’s an opportunity to step back and observe.”

In terms of the Swedish language, “It is a slow but steady process. I am starting to gain a bit of a foothold, which is nice, but I still have a whole mountain to climb. Swedish is a very interesting language, both to speak and to listen to. They have a variety of sounds that I have never used before, and they also roll their R’s, so pronunciation is a very difficult thing. On paper Swedish looks somewhat manageable, some of the words are similar (and sometimes the same) so I can sometimes get an idea of what’s being talked about. But translating from spoken Swedish is a whole different ball game.” While it is difficult and hard work learning a second language, Matthew adds that “being able to communicate with someone from another country in their own language is a very special thing.”

Moving to a new country without your natural support structures and friends can be difficult though and Matthew acknowledges that. “The ‘honeymoon’ period has definitely ended, I’m no longer a tourist and this is my life for the next eight months. Living with a host family here has its own set of challenges but I’m lucky that they understand where I am coming from for the most part. They have one of their kids away as an exchange student as well this year. It’s all a part of the learning experience and I know it will be worth it in the end.

“Overall, this is a very eye-opening experience. Coming from a relatively small town to being thrown into a whole different culture is quite shocking, taking it all in at once is impossible.

When I first signed up to be a part of Rotary exchange, I definitely wasn’t expecting most of these experiences. The challenges I’m facing are much different than I could have ever expected. And for that I’m so grateful. I’d like to thank everyone who has made this experience possible.”