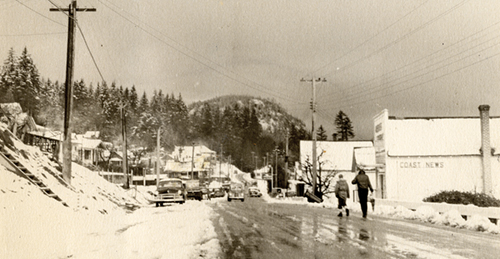 Posted by: The Local Weekly March 14, 2018 in Features, Local Community Leave a comment

The Museum is fortunate to have in its collection the archives from the “Coast News” newspaper, which contains documents and photos produced over the paper’s 50-year history. This year, we are working on making this collection more accessible to the public. To better understand the Coast News, I did some digging into the history of newspapers on the Sunshine Coast.

Coasters have always liked their newspapers. The Museum’s oral history collection contains many accounts of how local residents waited for delivery of papers from Vancouver in order to get caught up on the stories of the day. These papers, in addition to providing news, were an excellent source of entertainment. In Marie Scott’s oral history, she reminisced about how, as a child, she looked forward to the papers’ stories and about how her mother would theatrically read them to the family. 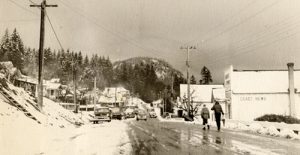 The Coast News building, on the right, was situated on Marine Drive in Gibsons. SCMA Photo #4249

After papers were read, they were sometimes shared with others. For example, a favourite activity of the local children when a tug came along the Coast was to row out to meet it and bring newspapers and baked goods to the crew (who greatly appreciated the treats).

This weekly paper, initially printed in Powell River with an editorial office in Halfmoon Bay, was started by locals Al Alsgaard and Ernie Parr-Pearson. In 1950, they sold the company to Bill Sutherland and Sam Nutter, who moved the paper’s office to Gibsons.

In 1954, Fred and Dorothy Cruice, of Regina, purchased the newspaper. In the early days, the Cruice family did most of the work at the paper. Fred was the editor and writer, Dorothy ran the office, their son, Ron – along with two other employees – printed the paper, and staff member Do Wortman collected the ads. The Cruice family ran the paper until 1975. Glassford Press, Ltd., was the last known publisher.

Since this time, we continue to have a great tradition of community newspapers on the Coast, including the Local Weekly.

We would love to hear any stories that you may have about Coast News and the people who worked there. If you have anything that you would like to share, please contact the Museum & Archives at 604-886-8232 or scm_a@dccnet.com.