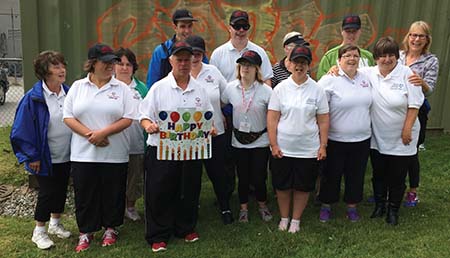 Posted by: The Local Weekly July 6, 2016 in Sports & Leisure Leave a comment

Hello, readers. Three of our Special Olympic Athletes, Michael Beckman, Genny Verge and Amber Maher, have been chosen to compete at the BC Summer Games with other elite athletes from around the province. Their talent, undying dedication and positive outlook will secure their chances of doing well. Beckman and Verge will be swimming and Maher will be competing in Track and Field. Congrats and best of luck.

Track & Field saw qualifying action in Langley on June 11 and 12. Athletes from all over BC came and ran, jumped and threw. Sunshine Coast athletes Amber Maher, Bruce Stuart, Genny Verge and Micheal Oswald did well to bring home firsts and seconds in many events. Of course they did so with the dedicated support of Head Coach Tania Flynn and Assistant Coach Robert Wotton.

The Softball Tournament in Port Coquitlam lasted till almost 9 in the P.M. Everyone came home happy, having given their all and coming in fourth in their C division. 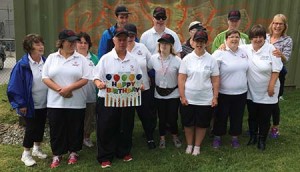 The year-end bocce game on June 25 was fun indeed, with a potluck lunch and the celebration of Wes Harrison’s 50th birthday. Ian Archer photo

The final soccer game between Gibsons and Sechelt, followed by the AGM was quite fun for onlookers, athletes and this reporter. When Michael Brooks stepped out from goal, I volunteered to take his place. So, fedora and all I stepped up to the challenge. I’m happy to say I let only one goal pass by me.

The AGM reviewed all the highlights of 2016 so far and elected new officers. The only new board member is Lisa Harrison, Program Coordinator. I was happy to be asked if I would remain on board as athlete reporter.

“On June 18 in Vancouver there was a Bocce qualifier. Our Gibsons bocce team, Wes Harrison, Darlene Nelson, Amber Maher and Candice Garrett came first in B division.  It was Darlene’s first time to attend a Special Olympics qualifier and it was the first time any team from the Sunshine Coast had attended a bocce qualifier.

Finally, be sure to read next month’s column for news about the Golf Regional Qualifier taking place at the Blue Ocean Golf Course on July 10.

I will be on hand to interview visiting athletes and gather news about the events of the day.