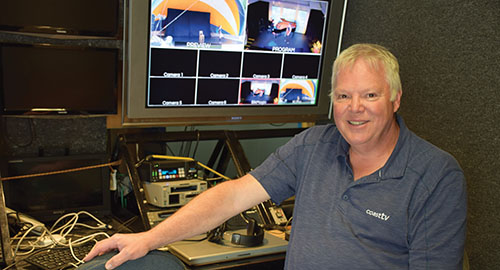 Coast TV – A launchpad for many programs… and careers

Posted by: The Local Weekly November 2, 2016 in Business Magazine Leave a comment 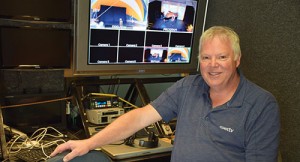 We might grumble about the cost of cable TV in this country, and in fact Canadians do pay some of the highest service fees in the world. But when it comes to Sunshine Coast companies that also give back to the community, it’s hard not to put Coast Cable close to the top of the list.

That give-back—or more aptly a “reflect-back”—comes in the form of Coast TV, the powerhouse little channel that, in many ways, shows the Sunshine Coast community to itself.

Coast TV—on cable 10 if you’re a Coast Cable subscriber—produces broadcasts of everything from live league hockey games to cooking shows; from parades to politics. Much of the programming is produced live from the company’s eight-camera truck. If there’s a marathon, a high school grad ceremony, a community meeting or any number of other kinds of events, Coast TV will often be there, as will the channel’s manager, Steve Sleep.

“We’re on the air 24/7,” noted Sleep, the born-and-bred Coaster who was trained at CBC in Vancouver and, now 57, has held the manager’s job for more than 30 years. Sleep runs the operation with just one other employee, Brittany Broderson, but also with the help of a corps of dozens of volunteers, from teens to seniors.

Sleep is quietly proud of everything the channel manages to get done, but gets especially enthused about some of the newer programming.

“We have a weekly program which we’re shooting right now called ‘Nail It Or Fail It’ [in which Broderson tries out new gadgets to see if they actually work]” said Sleep. “We have a new program called ‘The Plant Powered Kitchen.’ It’s a vegan cooking show and we’re shooting that with a volunteer producer and chef named Deb Gleason. We’ve got another new show this fall called ‘Fran Coast,’ produced by a young high school student from Chatelech Secondary, who’s doing the whole show in French.”

Some of the locally produced Coast TV productions, like “That Wilderness Survival Show,” are also rebroadcast at the partner cable system in Delta, and on other the local channels within the cross-country system run by the parent company, Eastlink.

But along with its range of competent, low-cost programming, there’s another side to the Coast TV story that’s just as crucial to its integration into the community: Since it first became a part of the local cable system in about 1980, Coast TV has been based in Elphinstone Secondary School, where students can choose broadcasting courses as electives.

“The broadcasting program was started by Marta Mackown, who was a teacher here in the school,” Sleep said. “Marta got together with Maryanne West, a community volunteer who had been doing some work with the CRTC (the federal broadcast regulator) and knew the requirements for community television. Marta and Maryanne approached the cable company and said, ‘Can we have access to the channel?’”

The company eventually said yes, thus launching a new iteration of Coast TV, with students learning the ropes in a broadcasting course where they produced local content for the channel.

Elphinstone’s broadcasting courses, in turn, have launched many students into TV and film production careers.

“If you visit a film set in Vancouver, you’ll find one of our former students, almost guaranteed. If you visit a television station in Vancouver, you’ll find one of our students there,” Sleep said. “If you watch the ‘Ellen DeGeneres Show,’ the TD (technical director) is a graduate of this program. He’s the same guy who was the TD for the opening and closing ceremonies of the Vancouver Olympics.”

The success stories don’t end there.

“We have students who’ve worked for the BBC, we have students who sell programs for national networks. There’s three graduated Elphinstone students working in news at CTV in Vancouver,” he added. “BCIT (the BC Institute of Technology, in Burnaby) knows our students well. We’ve had a student accepted into the BCIT Broadcasting Program, which is a hard program to get into, just about every year since I’ve been here. We have two there now.”

Sleep attributes the Elphinstone program’s reputation to its level of training.

Coast TV: community channel and educator, has set its own admirable standard of giving back.