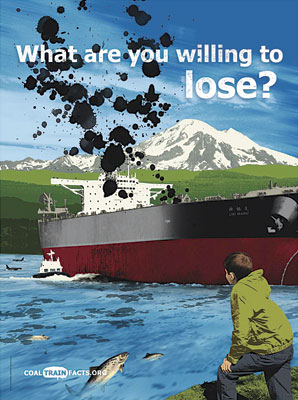 The newly formed ‘Salish Sea Coal Committee’ (SSCC) met Sunday, January 19, to discuss next steps in addressing the proposal to ship eight million tonnes of thermal coal through our coastal waters on its way to China to be burned for electricity generation.

Following the presentation of the Coal Hard Facts community forum late last year, organizers from the Alliance for Democracy, the Sunshine Coast Conservation Association and the SC Senior Citizens organization realized that a significant ongoing effort would be required to halt this serious threat to the area’s health and environment. Accordingly they reached out to the community at Sunday’s meeting, and were quite pleased with the number of committed volunteers who have stepped forward to dedicate time and energy to this issue through the SSCC.

The Sunshine Coast is in a unique position to contribute to the campaign that is mobilizing residents from Oregon, Washington, and the greater Vancouver area.  The Coast has been overlooked by authorities seeking citizen approval, as it is not in the area immediately adjacent to train routes or Port of Greater Vancouver expansions.

Not only has the Sunshine Coast community not been consulted about this dangerous proposal, but in an alarming display of disrespect for the sovereignty of the Sechelt Nation, the Sechelt Indian Band was neither informed, nor their approval sought, despite the fact that the transport route goes directly through their unceded territory and could significantly impact their traditional fishing grounds.

To be most effective, the SSCC will join efforts with the diverse tapestry of organizations and communities who are saying no to coal export expansions, including the Dogwood Initiative, the Powell River Pebble in the Pond Society, and Voters Taking Action on Climate Change. The collective will actively support the Sechelt First Nation in their opposition to the proposal by gathering and sharing relevant information regarding impacts on marine environments, particularly in relation to sensitive ecosystems and traditional fishing grounds throughout the area and in the Sabine Channel.

The group will also continue to press for a comprehensive health impact and environmental impact assessment not only for the Port of Metro Vancouver dock expansion, but of the entire shipping route. The group expects to work with Sunshine Coast Regional District representatives to advocate for the community’s right to have a say.

Anyone is welcome to join this committee, or may attend the next meeting on Sunday, February 16 at 2 p.m. at the Roberts Creek Library. Please contact Naomi at info@thescca.ca, or 604-741-9859 to get involved or receive more information by email. Visit www.thescca.ca for more information.