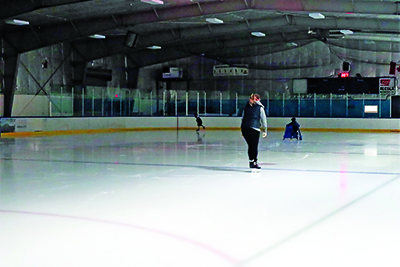 Written requests from the Coast’s figure skating and minor hockey associations did not convince an SCRD committee to support keeping ice in the Sechelt Arena past March 31. Committee members at the March 18 Planning and Community Development meeting stood by board direction that ice be retained beyond the end of March only when variable costs can be covered by the revenue generated from user groups.

A 2019 assessment of incremental spring ice costs was $7,435 per week. Staff advised the committee that as of 2021, that figure has increased. With the current provincial Public Health Order (PHO) restricting both adult and minor hockey activities, staff noted that there is not enough demand for ice time to balance off the operational costs of an extended ice season.

The Sunshine Coast Minor Hockey Association submitted a conditional request of 15 ice hours per week in April and May. Those hours would only be booked if the PHO were to be changed to allow for gameplay. The Sunshine Coast Skating Club committed to buying just under 18.75 hours of weekly ice time during that
period.

Those requests guaranteed the SCRD $13,466 in revenue for two months of ice operations. Incremental costs to retain ice-based use during that period are $65,852. Director of Planning and Community Development Ian Hall noted that 79 weekly hours of bookings are needed to cover extended ice season costs. Even if the PHO were to be adjusted and minor hockey’s request became a reality, an over $40,000 deficit would be incurred by extending the arena season to May 28.

Gibsons Area Alternate Director David Croal suggested that the organizations look to the corporate sector to provide the financial support needed to extend the ice season.

Roberts Creek Area Director Andreas Tize stated that the committee was being put into “the unenviable role of being the only spokesperson for the average
taxpayer.”

No committee recommendation on a season extension will be forwarded to the board. In response to a question from the Local, Hall indicated that SCRD staff actively monitor changes to the PHO and that they are prepared to “pivot” operations and advice to the board should the situation change.

In support of continuing youth sports opportunities, Sunshine Coast Skating Club President Andrea Watson wrote, “Now more than ever, they need a healthy outlet, a safe space, and a responsible adult present – all of which an ice arena and organized sports provide. In a time where youth feel a sense of loss and control over life as they knew it, we are seeing a dramatic increase in self-harming, eating disorders, and substance use.” A Facebook campaign launched March 19 by the minor hockey association asks those who want to support an extended ice season to contact their SCRD director in advance of the March 25 board meeting.

The Sunshine Coast Arena in Sechelt remains open for use, including public skating to the end of March. Attendance at public skating requires a reservation and adherence to COVID-19 safety protocols. Bookings can be made on scrd.ca.

2021-03-24
Admin
Share !
Previous: Gospel Rock and other chairing challenges
Next: No March 22 “take off” for aerodrome improvements