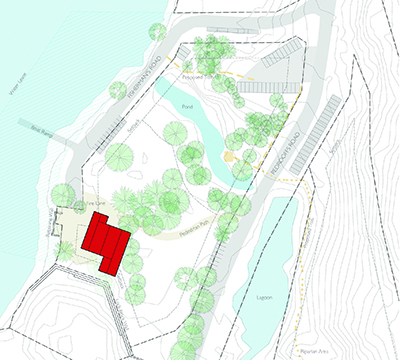 Continued planning for the estimated $3 million Coopers Green Hall renovation was endorsed by the SCRD board at its March 5 round two 2021 budget meeting. While a commitment to proceed remains outstanding, the board voted to include just over $528,000 in project funding from the Regional District’s budget as a “placeholder.” The finalized regional contribution will rely on updated project costs and whether additional money can be accessed through fundraising.
The next steps for the proposed reconstruction of the waterfront community hall in Area B (Halfmoon Bay) are design work to meet new building code and geotechnical requirements. Board members also requested a report before the end of June on financial and staff time commitments required to address a myriad of information requests that could impact moving the project forward. These range from asset management, operating and maintenance plans for the facility, addressing concerns related to site parking and the area’s boat ramp, variations to the scale and scope of the project, and ensuring it is a net-zero emissions building or net-zero ready. Other items the board wants to address before saying “yes” to the project as proposed are a financial review, addressing potential cost overruns, and policy around community hall operations.
Based on the work outstanding, timing for project tendering has not been set. Staff estimates this could happen as early as this fall.
Getting board approvals to this point took close to three hours of debate at the second round of budget discussions on March 4 and 5. Area B Director Lori Pratt emphasized that her community has voiced its support for this project at the existing hall location. Directors from Areas D (Roberts Creek), E (Elphinstone) and F (West Howe Sound) continued to express concerns about moving forward without details about costs and future impacts.
“Knowing the full implications before we build is a prudent thing to do,” said Area D Director Andreas Tize. He likened the process that faced the board around the project to BC’s Site C Dam. “We were handed a lemon. We can proceed to make lemonade or hand the lemon back and buy a grapefruit. Do we buy the lemonade press, or hit the reset button and start again,” said Tize.
Area E Director Donna McMahon remains concerned with the size of the hall project proposed at 3,185 square feet. That is three times larger than any other SCRD community hall. McMahon is worried about construction cost overruns as well as escalating future operations and maintenance requirements. In her view, the SCRDs 2005 regional recreation referendum and the subsequent Sechelt pool and Gibsons arena projects were “rushed” processes that continue to cost area taxpayers dearly.
There will be no property tax impact this year from the potential project. Even if construction begins in 2021, staff estimate that 2023 would be the earliest that taxation by the SCRD to cover its project costs would begin.
Once the amount of regional district funding required to build is known, there are further board choices needed on where that money will come from and repayment options. If borrowing is required, an Alternative Approval Process or referendum may have to happen. The potential of having only residents of Area B taxed to cover repayment was raised as a possibility.
The Halfmoon Bay Community Association has already raised over $345,000 for the project. That group has provided a letter of commitment to the SCRD that it will continue these efforts. The SCRD has been awarded just over $2 million in a federal/provincial infrastructure grant for the work. It has also committed $200,000 in amenity contributions received from independent power projects in the area.
Connie Jordison