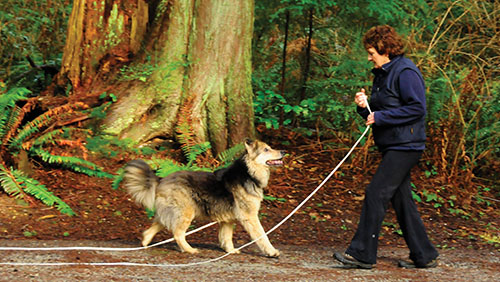 Posted by: The Local Weekly May 24, 2017 in Pet Smarts Leave a comment

To help your dog focus, teach new skills in an area that is free of distractions.

Increase the difficulty of the training exercise by increasing criteria in one area at a time.

Use rewards in training. Police and military dogs in the Netherlands are being trained with the trainers rewarding desired behaviors, and by teaching the dogs in small steps that build on one another. They report that they have cut their training time down to one-eighth of the time it originally took and they have found that dogs trained this way handle new situations confidently as they are not afraid to try things (Prins, Haak, & Gerritsen, 2013). 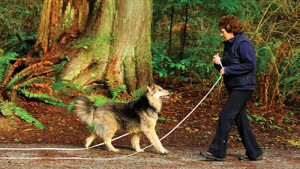 A longline can be used in training a dog. Photo submitted

Incorporate play into training sessions. Play is often used as a reward in the training of working dogs. We know that social interactions with familiar humans are highly rewarding for many dogs and that dogs whose owners play with them have been found to score higher in obedience tests than those whose owners do not play with them (Bradshaw, Pullen, & Rooney, 2015).

If you can’t train everyday, don’t worry.  Once or two short training sessions a week can result in a well-trained dog. In fact, a study on beagles revealed that weekly training resulted in better learning performance than training five times a week, when performance is measured in the number of training sessions required to reach a certain training level (Meyer & Ladewig, 2008).

2017-05-24
The Local Weekly
Share !
Previous: Our student trustee: ‘I have had a wonderful time’
Next: Sechelt proclaims Meatless Monday

Training important for your dogs safety

Tips to teach your dog to walk on a loose leash

How to meet socialization goals despite the current restrictions