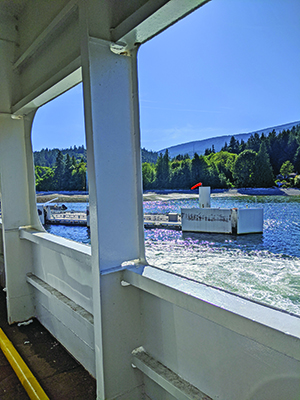 Southern Sunshine Coast Ferry Advisory Committee (FAC) chair Diana Mumford said the free reservation system hinted at by BC Ferries (BCF) president Mark Collins on July 27 is not coming to the local route anytime soon.
Mumford explained that BCF’s “Fare Flexibility and Digital Experience” initiative has been under discussion since late-2014. That project involves an upgrade to the BCF website which will allow travellers on reservable routes to book sailing space by paying both the reservation and fare cost. It would also mean that BCF could offer reduced fares on less used sailing times.
The system would mean minimal space for ferry travellers without reservations. The FAC has expressed concerns with using that model on Route 3, the Langdale-Horseshoe Bay run. “We have a significant number of commuters and the expectation that they would have to reserve travel both directions every day would not be well received by our residents. We have been told by BCF that they plan the roll out for other routes first, and then to work on a model that better suits Route 3,” said Mumford.
In Mumford’s view, the main take-away from Collin’s presentation was the state of BCF’s finances. She believes that if support from senior government to offset BCF losses due to the COVID-19 pandemic is not forthcoming, we will be facing much higher fares in the future.
In speaking with The Local on July 27, Collins said the BCF was not eligible for the COVID-related federal wage subsidy program because it does not pay income tax on its earnings. Under Canada Revenue Agency rules, BCF is considered “tax-owned’ by the province, even though it is not a crown corporation. BCF was also excluded from the one-billion-dollar federal/provincial funding program announced on July 16 to help public transportation providers like BC Transit and TransLink offset the losses they incurred during the pandemic.
Mumford also commented on the medical assured loading (MAL) provisions for ferry passengers, now included in the Provincial State of Emergency order. “Our Committee has some significant issues with the protocols and processes of this system, and have received numerous negative comments from Coast residents for whom the MAL has not worked at all, and put people’s health and welfare at serious risk. The FAC is continuing to work on having it altered to better meet the needs of Sunshine Coast residents.”
MAL is available for those who need to travel for urgent medical reasons by personal vehicle. Only doctors, nurses or clinical social workers providing current care can submit a MAL request. The medical professional must apply for this privilege for the patient, in addition to providing a Transportation Assistance Program (TAP) form.
The number of assured loading spaces on each sailing is limited. There may be a delay until a later sailing if the spaces are full when the patient arrives. If a patient needs to travel on a specific sailing, a reservation is recommended. Complementary reservations can be provided, if arrangements are made in advance.
MAL is not available for general, elective or routine doctor, dentist or specialist appointments, even though patients may be eligible to use a TAP form for free ferry travel for these situations.
Connie Jordison