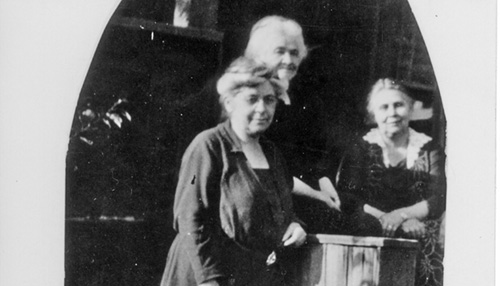 Posted by: The Local Weekly July 23, 2018 in Local Community Leave a comment

Dougall Park, in Gibsons, is named after the late Louisa Bryson Dougall. I mention this because – unless you are one who reads the plaques in our local parks – you may not know this detail. The writing of this article, in fact, was motivated by a recent conversation that I had with friends who are avid park users (but not regular plaque readers) and assumed that the park was named after a man.

Louisa Dougall, an early settler on the Sunshine Coast, moved here with her husband, George Matile Dougall, in the late 1800s or early 1900s. They purchased George Gibson Jr.’s 160-acre pre-emption c.1901. The property, which overlooked the Shoal Channel, comprised a large portion of what is now lower Gibsons just east of Gospel Rock. It included the entire bluff (then known as Dougall Bluff) and the marina area up to today’s Winn Road (the site of the current post office).

Louisa was described in Francis Wyngaert’s book “The West Howe Sound Story: 1886-1976” as a community-spirited person who formed a women’s league. She was also a proponent of the volunteer construction of a local dance hall where locals could be found doing the quadrille, one-, two-, and three-step, French minuet, waltz, and schottisches. 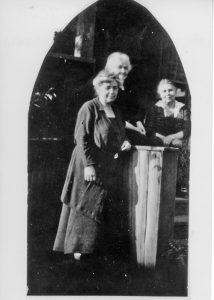 Louisa was a proficient piano player, and often played the piano at church. An anonymous source from the museum’s oral history collection recounted how Mrs. Dougall (an elderly woman at this time) “could play anything. And whatever anybody wanted to sing she did all the accompanying.” Louisa also taught piano lessons to the local children.

Mrs. Dougall donated a parcel of her land in the early 1900s to the Anglican Church with the intention that a new church and a children’s playground would be constructed. The land was not developed as such by the Church, but rather cleared by volunteers for recreational purposes. In the 1930s, volunteers completed more extensive work there, and eventually the Kinsmen Club began leasing the area and erected a club house on the site. The park became known as Kinsmen Park.

The Anglican Church eventually transferred title of the land to the Town of Gibsons with the caveat that the land be used in the manner originally intended by Louisa, who passed away c.1939. The Town dedicated the park on BC Centennial Day, July 20, 1971, as Dougall Park, in recognition of Louisa’s generous donation of the land. The plaque can be found next to the children’s playground.