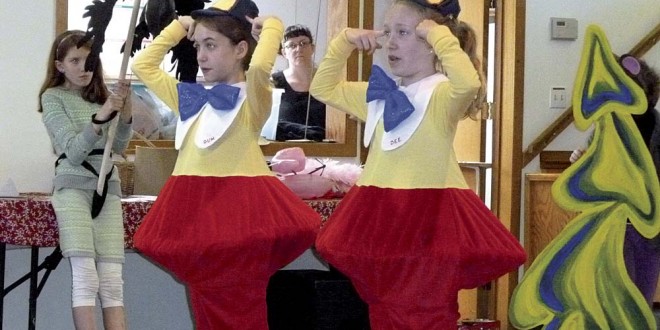 Posted by: The Local Weekly May 6, 2015 in Uncategorized Leave a comment 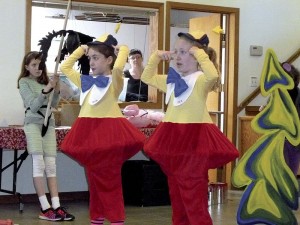 Rehearsing for their roles in Alice in Wonderland are, left, Emmie Hendricks as Tweedle Dum, and Jaclyn Semaniuk as Tweedle Dee. Nancy Pincombe photo

I just love dropping in on a rehearsal, and the Cheshire cat had nothing on me, as I sat in the basement of St Bart’s church, grinning away. I was watching the kids from the Driftwood Theatre School put the finishing touches on Alice in Wonderland. What impressed me most was how easy it was to forget that these were kids! As actors were busy in scene, the waiting characters, variously dressed as rabbits, knaves, playing cards, shrubberies and Tweedles, sat in chairs quietly awaiting their turns, conserving their energies, focused. No one was disruptive or fidgety. Such professional demeanor on a sunny Sunday afternoon from kids as young as seven!

The costumes (thanks to the Driftwood Costume Shoppe, and some very skillful parents) are fabulous! So are the sets and props (thanks to stage manager Sandi McGinnis, and set builder Doug Ives), and when these are in place on the real stage at Heritage Hall they will be glorious.

Driftwood Theatre School has been going for five years now. Last Fall, the Junior Drama Performance Troupe studied three plays, debating the merits of each, before voting and choosing The Musical-Panto version of Alice in Wonderland by Doris Russel.  Auditions and rehearsals began in January.  Sixteen year old Elisabeth Lyle, who has been with the group since inception, earned the roll of Alice. To fill the many supporting roles, younger actors from the intro class and the family fun class were called up, in all twenty-five kids from seven to sixteen. It is heart-warming to see this mixed-age group work together as a team.

Instructor and Director Ingrid Bilton has been teaching for more than thirty years and she describes this group of young actors as some of the most talented she has come across. During the final rehearsals, Bilton’s instructions and suggestions are few, and rarely repeated; the kids own these roles now, and take responsibility for getting it right.

Panto is rowdy, rhythmic, rhyming, crammed with action and laughs, and often features gender role switching (here the nasty Knave of Hearts is a girl—Skylar Moore, and the Duchess is a boy—Quinton Ruth), which means these kids have to understand their lines, actions, staging, how to work the props, they have to muster the necessary intensity to deliver all of the above, AND they have to get the jokes. It’s a lot to ask, and I was consistently impressed.