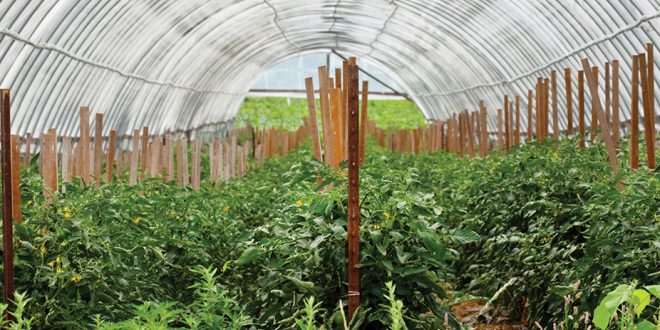 Posted by: The Local Weekly May 22, 2019 in Business Magazine 1 Comment

As my five-year-old son scampers beside me while we walk up the long driveway to the Exotic Fruit Nursery in Roberts Creek one afternoon in early May, the wind cuts through my two layers of sweaters and chills me. It’s hard to believe that only three days earlier, the province was still in the grip of a record-shattering heat wave that triggered 22 wildfires. With a lush palette of spring greens and multi-coloured blossoms popping all around me, it’s easy to momentarily forget the impending drought that threatens to devastate Coastal farms and gardens this year. Wildfires. Water restrictions. In May! I shake my head. When I moved to the Coast seven years ago to start a family, it was unfathomable to think that we could, and would, be in this position, and so soon: the security of our local water and food resources are now directly threatened by pressures of climate change. And it’s getting worse every year. 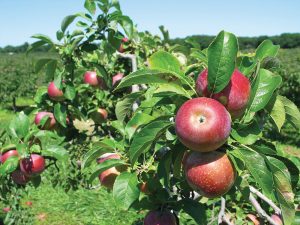 Last November, the world received dire news from the UN’s Intergovernmental Panel On Climate Change Special Report on Global Warming of 1.5°C, which recommended that the world needs to bring carbon emissions to 45% below 2010 by 2030 in order for our planet to survive. This was followed in April by Canada’s Changing Climate Report, released by the federal Ministry of Environment and Climate Change, which delivered the grim projection that Canada is warming at twice the rate of the rest of the world.

A couple of weeks ago, we were delivered another blow when the Global Assessment Report on Biodiversity and Ecosystem Services predicted the imminent extinction of over a million species.  Around the globe, communities are beginning to feel the acute impacts of climate change on a local scale, and it made me wonder if we have appropriate water and land resources on the Sunshine Coast to sustain our population in the face of heightened climate challenges: what if we can’t grow
food here?

A friendly and curious llama, freshly sheared of its woolly winter fur coat, trots over to the fence to greet us as we stroll past, providing welcome comic relief to my dark reverie.  Clad in muddy overalls, farmer Annette Clark waves me over.  We sit to chat in the center of the chaotic swirl of flora on her sprawling acreage bursting with groves of fruit trees, berry bushes, greenhouses, sheds and ponds.  Sharp, practical and philosophical, she doesn’t mince words: “We have to act really swiftly here because this year could be really catastrophic, theoretically, with forest fires and no water left.”  The climate change anxiety we both seem to share is palpable, and it’s coming up more and more, directly and bluntly like this, in causal conversations with fellow Coasters: it feels like we’re all worried.

“I have half the sales that I had last year because right now people are afraid to put anything in the ground because they don’t know if they can water,” says Annette, whose primary business is selling food plants to gardeners. “I hear from so many other people that grow, they say, ‘well, it’s not worth it, what’s the point doing it now, I can’t water anymore’ because it really looks like we will go to stage four early this year.” 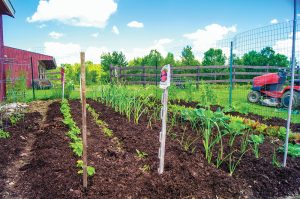 During the drought of 2015, Annette’s entire operation was threatened, particularly at the point we hit stage four water restrictions, which bans all watering. She lobbied the SCRD to change watering restrictions to ease the pressure on farmers. “Farming needs to be seen as essential,” she said. Like Annette’s farm, most farms on the Coast almost exclusively supply all of their food to the local market. This is both good for the local economy and long-term food security. But without a secure water supply, our food supply – in both market farms and private gardens – is threatened. Farmers like Annette are investing their own money and energy into adapting to the changing reality, but she feels frustrated by how long it has taken various levels of government to come up with solutions. The SCRD recently released an amended, more comprehensive water restrictions schedule that finally recognizes commercial farming in its own class with less restrictions, but farmers will be left out to dry completely once stage four hits.  Since drought has become the new reality on the Coast, Annette knows she can’t rely on the SCRD water system to keep her farm afloat. “I just need it as an emergency measure in the middle of summer,” she says of SCRD water. “I need the water at the time when they shut it off.”

“I’ve switched totally from seedlings and vegetables to fruit trees, they do much better in the summer because they have deeper roots, I don’t have to water all the time.”  Annette has been designing and building a rainwater storage system in the form of large tanks and pools that will eventually have the capacity to store 60,000 gallons. She has replaced all of her roofs with metal roofing in order to collect rainwater and has installed a drip irrigation network to water her trees.  “I’m trying wherever I can. I’m working fourteen hours a day just to save everything we have.” 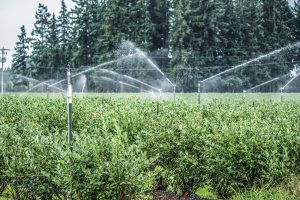 While she works diligently to keep her farm running and her plants healthy, she knows the issue is bigger and feels we all have to work together toward a more sustainable
future. “We’re always putting band-aids on everything; we really need to have a true sustainability concept. We can’t live with everlasting growth, there is a limit on this finite planet and we need to come up with bold decisions on where are our limits and how we reduce our footprint, not just on the water issue.”

My son and I thank Annette and say good-bye, contemplating her words as we roll on. On our way home, we stop at Henry Reed Organic Produce, the Coast’s largest farm. Since the first summer we arrived here my family has enjoyed their delicious spring greens. At the gate, we can see fields of perfectly kept lettuce covered in cloche, all of which will be picked soon and enjoyed by Coasters. Farmer Martin Kiewitz tells me “we’ve got a real issue here. If I can’t water during stage four, we’ll be out of work all season.” Right now, he is investigating the possibility of drilling a well. He has always tried to be a role model to young farmers, to show them that small-scale local farming is viable, but he’s very worried about the future. He feels deeply that his role is to provide for his family, his employees and his community, but climate pressures are starting to make it more challenging.

“I’m hungry!” My son tugs at my sleeve. I look at him, knowing I can provide for his needs today, but considering issues of climate change, lack of water supply and agricultural infrastructure on the Coast, I wonder what the future holds. As we enjoy our lunch together, Annette’s words ring through my head: “We all have to work together, everybody, to find a solution.”

2019-05-22
The Local Weekly
Share !
Previous: The business of bees
Next: Advantage service & leadership: Staff development is the path to success