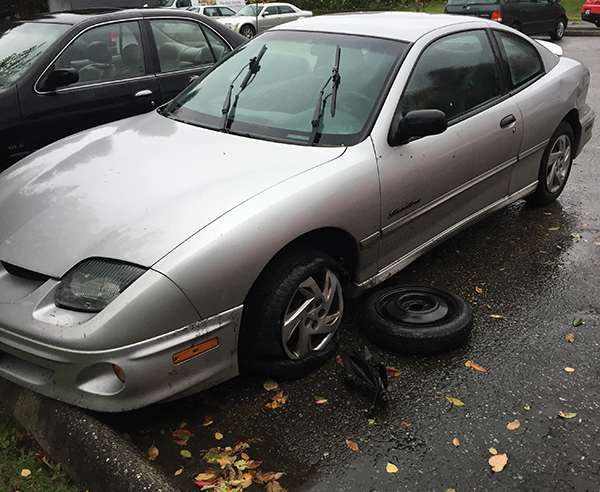 RCMP impounded this vehicle after twice arresting the driver for drinking and driving on Sunday, Oct. 16. RCMP photo

A 49 year-old man from Gibsons may be facing numerous criminal charges after being arrested twice on the same day for driving while impaired.

Around 8:45am on Oct. 16, Sunshine Coast RCMP received multiple calls about a possible impaired driver in the Gibsons area, driving a grey 2001 Pontiac Sunfire, two-door. The driver was reported to have first gone to two different liquor stores, both of which were closed, before driving through a mall parking lot, smashing into a sidewalk and flattening one of his tires. The male also drove into oncoming traffic and nearly struck a pedestrian before driving to another liquor store, where he drove into a fence. After realizing that the third liquor store was also closed, he drove away, hitting a cement wall in the process. When he pulled into the parking lot of an apartment complex, he hit a parked car, then got out of his vehicle and started trying to change his flat tire. RCMP arrived and arrested the driver before he could get his tire changed. The male allegedly provided breath samples well in excess of the legal limit, and was released on a Promise to Appear in Court, and was given a driving prohibition.

Shortly before 5:30pm the same day, Sunshine Coast RCMP were called after the same male reportedly struck a curb while driving in a mall parking lot, and appeared to be intoxicated while walking into a nearby restaurant. When police arrested the male for driving while prohibited, the officer also noted the male again had an odour of liquor on his breath. He failed a roadside screening test, and was again taken to the RCMP detachment, where he again allegedly registered breath samples in excess of the legal limit. The man’s vehicle was impounded, and he was held in custody to sober up.

“The first incident alone was incredibly dangerous,” said Cst Harrison Mohr with Sunshine Coast RCMP. “But the fact that this man was back behind the wheel eight hours after being arrested for impaired driving is all the more concerning. We are grateful to the witnesses that called us, ultimately preventing a disaster. They may very well have saved a life.”

Sunshine Coast RCMP are asking for any additional witnesses to come forward, specifically the pedestrian who was nearly struck by the vehicle, and another male, whom is believed to have spoken with the suspect driver near one of the liquor stores, and told the male not to drive. Anyone with additional information should contact Sunshine Coast RCMP at (604) 885-2266, file #2016-6898.