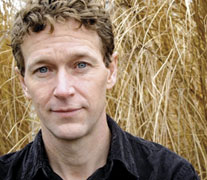 J.B. MacKinnon’s ground-breaking book, The 100-Mile Diet, established the notion of local eating in the popular imagination; his latest work, The Once and Future World, promises to do the same for re-wilding. Hear the award-winning Canadian writer, the next featured author in the series of readings, at the Arts Centre in Sechelt (corner of Trail and Medusa) on Saturday, April 5 at 8 p.m. The series is presented by the Sunshine Coast Arts Council and sponsored by the Canada Council for the Arts. Admission is by donation.

MacKinnon has garnered more than twelve National Magazine Awards. His first book, Dead Man in Paradise, won the Charles Taylor Prize for Literary Non-Fiction, while The Once and Future World was short-listed for three of Canada’s four non-fiction awards.

Not only are MacKinnon’s books informative, they are also beautifully written. Information is enlivened by sensitive description and illustrated by personal anecdote. The books represent a profound and illuminating reflection on topics of importance to ourselves and to our planet.