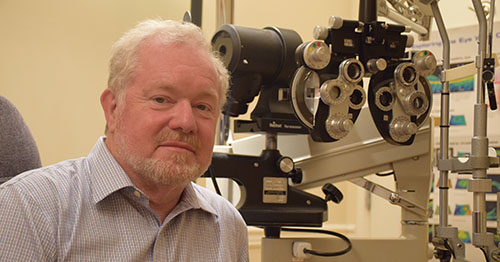 Posted by: The Local Weekly November 2, 2016 in Business Magazine 1 Comment 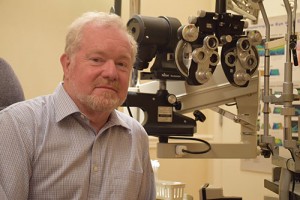 The 61-year-old ophthalmologist’s Sechelt practice does generate a considerable income. He just doesn’t take a penny of it for himself. After paying his office expenses, he donates everything that’s left over to Seva Canada, a Vancouver-based charitable organization with a mission to restore sight and prevent blindness in the developing world.

It’s Woodburn’s unique and deeply satisfying “retirement” project. He gets to spend three days a week in his medical office doing what he loves, living comfortably off a nest egg, all while making the world a better—and literally brighter—place for people who might otherwise suffer blindness.

Woodburn started to contemplate retiring two years ago, but couldn’t figure out how he wanted to spend all that free time. He said he thought about it for a long while, then woke up from a deep sleep one morning realizing, “Oh, I know what I’m going to do.” The business plan was born.

He said it would especially be a waste, given his expertise in a healing profession: “If you still wanted to be in the game and help people, why wouldn’t you?”

Woodburn sees crucial distinctions in the way people can help others. While volunteering is one important form of contributing, money can be more effective.

“Many retirees donate volunteer time to charities. But often the charity would benefit more if individuals donated the proceeds of their ‘career time’ instead,” he said.

Born and raised in Vancouver, Woodburn worked as a family doctor in Queen Charlotte City for eight years before he opened his specialty practice in Sechelt in 1993. Over the next two decades, he performed more than 4,000 cataract operations at Sechelt Hospital (then St. Mary’s).

But, because a cataract operation can be performed in the developing world for about $50, his donations have actually helped accomplish even more than he did in his career here.

“Since I started my ‘non-profit’ practice, I have funded more cataract surgery in Nepal than I performed in 20 years in Sechelt,” Woodburn said.

Seva (pronounced “say-va”), is a Sanskrit word for service, and Woodburn has lived up to that by donating his time as well as money. Last winter, he travelled to Nepal for the charity for three weeks, helping establish a glaucoma prevention program in a rural hospital district.

“They’re doing all sorts of really good work, but they’re just not addressing glaucoma. It’s like the last unaddressed problem in the developing world for ophthalmology. Glaucoma is just a really difficult problem from a public health point of view.”

The condition, which affects about two per cent of the human population, is caused by a subtle buildup of pressure in the eyeball that can only be detected in a medical test. Unless it’s found and treated early, nerve damage from glaucoma causes untreatable blindness some 20 years later.

Woodburn developed a glaucoma screening program that will be implemented over the next 10 years.

“I’d like to visit other places that Seva works in and do a similar thing,” he said.

Woodburn said he’s sharing his story because it could be helpful for others near-retirees in a similar quandary.

“I’d recommend doing this for anybody who’s lucky enough to be in a position to retire, but enjoys what they do. It doesn’t matter what it is. Enjoy what you’re doing. If you can benefit somebody else, why not keep doing it?”

2016-11-02
The Local Weekly
Share !
Previous: Celia Fisher remembered for helping her community
Next: From the publisher’s desk…