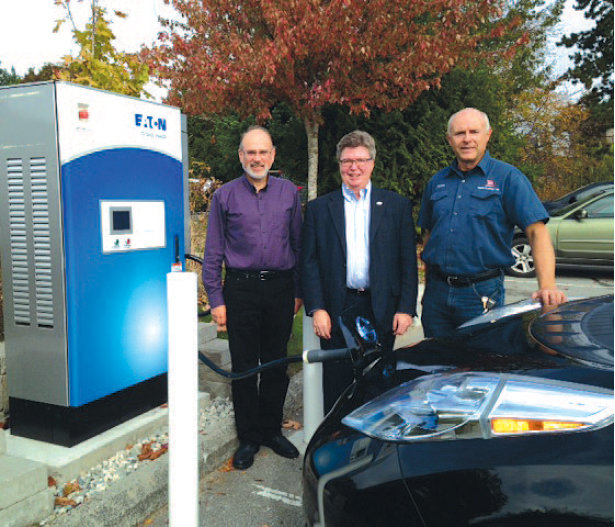 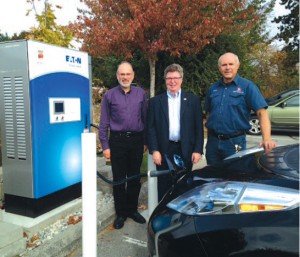 Access to public DCFC stations makes travelling between communities using an EV easier. These stations require only 20 to 30 minutes to re-charge an EV.

Sechelt’s 50 kilowatt fast charging station is one of 30 funded as part of the Province’s Clean Energy Vehicle Infrastructure Deployment Program. The $1.3 million DCFC portion of the program is managed by the BC Hydro and Power Corporation. The Corporation owns the station equipment and invested $15,400 to install it in the northwest corner of Trail Bay Mall parking lot. The equipment is leased to the District of Sechelt, the operator of the station, for $1/month for five years.

The District of Sechelt secured the location for the station through cooperation with Trail Bay Developments, the owners of Trail Bay Mall. The site has been listed on the Plugshare.com website to let EV users know the site is available for use. The location was selected in keeping with the program’s focus on high visibility locations near commercial and tourism facilities to encourage use of electric powered vehicles in the community and throughout the Province.

Sechelt will be covering the cost of vehicle charging, estimated at about $100 per month, for the first six months to promote awareness and use of the location.

As of April 1, 2015, customers will pay about $2 per charging session for the average EV and $5 to $7 to re-charge an EV with larger batteries. The station is automated, available 24 hours a day and is part of the electronic ‘Green Lots’ network, which allows customers to pay for their purchase and provides information on where EV recharging stations are located.

“We are committed to providing infrastructure and public spaces that are innovative, integrated, energy efficient and leading edge. This project meets all of those criteria,” said Sechelt Mayor John R. Henderson. “Many thanks to all the groups involved with this project for helping us build Sechelt as an electric vehicle friendly community and sharing that message with the world.” Submitted

Previous: Coast Watch
Next: Acclaimed Photographer on the Coast