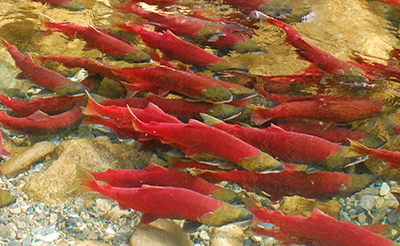 Female adult sockeye from the Fraser River are dying at significantly higher rates than their male counterparts on the journey back to their spawning grounds, finds new UBC research. For every male salmon that doesn’t make it to their natal stream, at least two, sometimes three, female salmon die.

“This is causing skewed sex ratios in their spawning grounds, something that has been observed in recent years,” says lead researcher Dr. Scott Hinch, a professor in the faculty of forestry and head of the Pacific Salmon Ecology and Conservation Laboratory at UBC. “The implications on the health of Fraser River stocks are concerning, particularly as Pacific salmon populations in BC have been declining over the past several
decades.”

Hinch noted that records in the 1930s and even up to the early 1990s show that for most years, females outnumbered males on spawning grounds. The sex ratios started to change in the early 2000s towards relatively fewer females.

“A combination of environmental stressors could have triggered the shift,” Hinch explains. “More females die relative to males when migration conditions are challenging. This happens when the water is too warm, or there is too much turbulence, or when the fish have been handled or released from capture. Stressful events have a larger impact on
females.”

The trend of higher female mortality when environmental conditions are challenging also was identified in other Pacific salmon species, including Coho and Chinook salmon, and in sockeye in other river systems.

Hinch and his collaborators are proposing four reasons why females are dying at higher rates than males: depletion of energy reserves, reduced cardiac capacity, stress and disease.

“Females have higher heart rates and smaller hearts than males leading to reduced cardiac capacity. Because female gonads are so large compared to males, they have to divert way more blood to them, especially as the eggs are developing and this requires even more oxygen supply from the heart, so it’s likely that when the migration is difficult, females are not able to get enough oxygen to swim.”

Hinch and his team acknowledge that more research is needed to fully understand the mechanisms behind the different mortality rates in salmon. But they warn that as rivers continue to warm with climate change, we will see even higher rates of female mortality.

The study, “Exceptionally high mortality of migrating female salmon: a large-scale emerging trend and a conservation concern,” was published recently in the Canadian Journal of Fisheries and Aquatic Sciences.