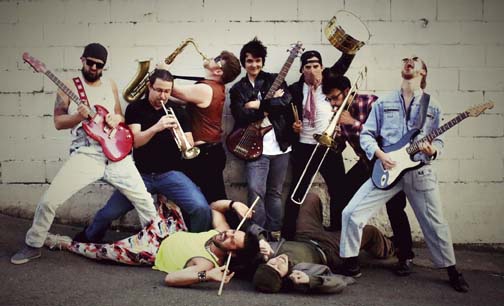 Five Alarm Funk in the Creek

Posted by: The Local Weekly January 28, 2015 in Arts & Entertainment Leave a comment 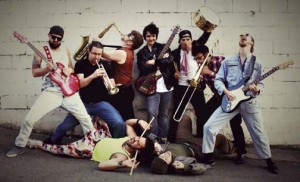 The Annual Gibsons Landing Jazz Festival winter fund raiser is being held at Roberts Creek Hall on Saturday, February 7th with doors opening at 9:00pm. The band Five Alarm Funk is back and in full frenzied force.

Five Alarm Funk is Vancouver’s own 9-piece afro-funk orchestra. For more than ten years the band has brought their relentless grooves to clubs and major festivals across Canada. Intense horn lines and percolating afro-beat guitar combined with the interplay of four percussionists create an unstoppable dance party. To describe it as a sexy wall of sound would be an understatement. Rhythm, funk, jazz, reggae and blues all packed into a tight sonic thud. These guys are a prime example of an act that makes playing a show look like fun.

The tight unity that FAF exhibits at each show really cannot be understated. From the coordinated dancing to the multiple sections performing in unison without outdoing one another, FAF is like a symphony orchestra on psychedelics. The really good kind.

After 5 years they are back at the Roberts Creek Hall and tickets are going fast. The cost is $25 in advance from Strait Music in Sechelt, MELOmania in Roberts Creek and Laedeli in Gibsons. The 20th annual Gibsons Jazz Festival June 19-21st is produced by the Sunshine Coast Jazz and Entertainment Society. More information from www.coastjazz.com.