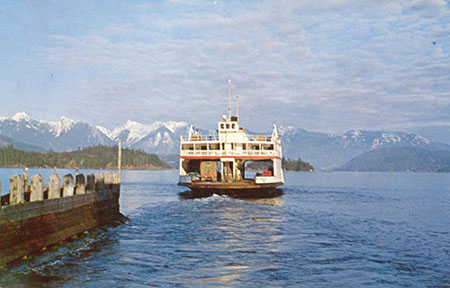 Posted by: The Local Weekly November 16, 2016 in Local Community Leave a comment

The current conversation around a fixed link proves the saying true that history repeats itself. If we change “Fixed Link” to “Road to Squamish” and look through the Museum’s newspaper archives we find that the conversation goes back 60 years. It starts in 1958 in a “Coast News” editorial:  “The road to Squamish has become important to the Roberts Creek Community Association and its executive has sought and obtained support from other organizations in the area to get the road built…leave Vancouver by car and motor around Howe Sound and be on to Gibsons and Sechelt without having to get out.” Blackball Ferries was in service from Horseshoe Bay to Langdale at the time. 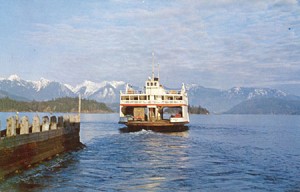 Phil Gaglardi, the Social Credit Highways Minister in 1959, did not support the idea of a road to Squamish, saying that “the area will have to wait a considerable time before the road to Squamish is completed”. But 1960 was an election year, and “Coast News” reports, “Pressure for the road to Squamish will be stepped up, Tony Gargrave, [MLA] informed a public meeting…in Gibsons. Opening of this road would double the population in 10 years…He also advocated a better ferry service for the area.” The estimated cost for the link would be about one quarter of the annual budget of the Department of Highways. (The 2016 proposals for a fixed link are about three times the annual BC Government’s Transportation and Infrastructure budget). Yet, the desire for a road was not unanimous. The newspaper reports that some speakers from the floor found that after all Black Ball service was not as terrible as some made it out to be.

Then as now, the ancillary question was the impact of increased traffic on an already busy Hwy 101. In 1969, MLA Isabel Dawson mentioned that while the area is looking for a road to Squamish around Howe Sound, Highway 101 should be given top priority on the list. She noted that major construction will be necessary to handle traffic and the importance of ferries and roads for developing the tourist industry in this area.

Sixty years from now will we be having the same conversation or is now the time that will change history?