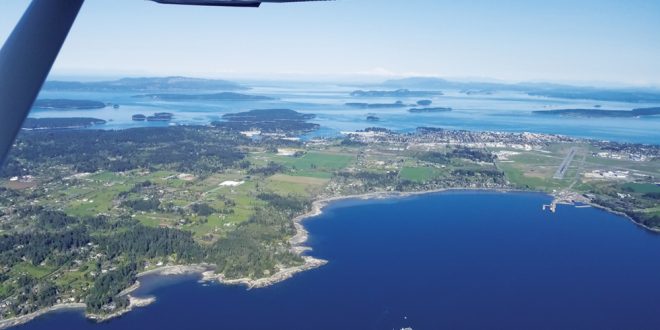 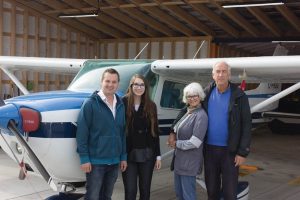 No day is truly the same for air taxi service Fly! Coastal. There is no set schedule and staff are ultimately unaware of when and where they will be flying during the day. While some may be flung into a world of chaos with the lack of structure, this company has blissfully built its entire business around having no set flight schedule, giving its clients discretion as to when and where they want to fly. How does this jigsaw puzzle of people’s lives, stories and priorities all work? Well quite simply actually. If someone wants to fly at 1pm and another at 3pm, dynamics and diplomacy set in and miraculously both parties agree to fly at 2pm.

According to co-founder and chief pilot Greg Caple, not having a set agenda isn’t by choice, but rather because the company is located at an aerodrome, rather than an airport which would allow scheduled service. “What that means is we cannot setup scheduled flights from an aerodrome – it’s the law,” Greg said. “It’s also useful for us to not have scheduled air service, because if you do offer scheduled air service, the flight must go at that scheduled time.” This could lead to possible financial discomfort for the company and with the current model the flight price is reflected by how many people are flying. “It’s the business model we use. We only go when it’s viable, for us and for our customers,” added office manager Selena Bell. 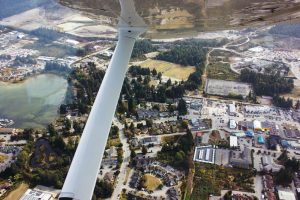 Though Fly! Coastal has been running for a decade and a half, the possibility of the operation really began when Greg Caple began sneaking out of his home at age 14 to fly without his parents’ permission. With his career progressing he began to fly in the Yukon and then went to work for the now defunct Wardair, later settling on the Sunshine Coast, founding Fly! Coastal and continuing a career as a flight instructor and charter pilot.

Reflecting on the history of the company, Greg takes pride in its humble beginnings but admits Fly! Coastal wouldn’t be anything without the organizing and scheduling from the office. “I think any company like this is entirely reliant on the front end. It is hugely complicated in that the whole basis of our business relies on the front-end people coordinating passengers.” Greg said, mentioning behind the scene workers Selena Bell and Dana Caple.

From their position at the Sechelt Aerodrome, helicopters can be seen taking off throughout the day, moving crews and supplies to various places and projects that are reachable within a short flight. Greg believes the aerodrome isn’t just useful for helicopters but will become increasingly attractive for all air transportation as the Sunshine Coast continues to develop, which is something he thinks the general population doesn’t realize. “This place viscerally affects the economy of the community and that’s all based around this ‘sneaky facility’ that is quickly accessed in a matter of minutes from Sechelt and Gibsons. There can be only great interest and value to our community at the end of the day,” Greg explained. 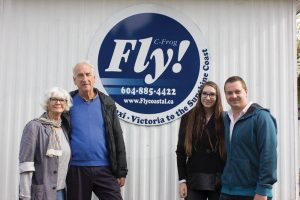 Talks of an expansion at the aerodrome have risen in the last number of years, with discussion on increasing the size of the aerodrome including the runway. “I believe with the kind of interest that is being sparked now in terms of development at the airport and its use, this will be a valuable self-sustaining asset for the community,” he concluded.

Flying was once an exotic way of transportation but now has become an inexpensive alternative compared to car and ferry costs. For example, a trip to Victoria by ferry could take upwards of six hours, rather than a 35-minute flight. In fact, one of the company’s first non-scheduled routes was to Victoria where Dana’s family lives. “I wanted to visit them regularly and Greg and I would have huge arguments on the tarmac because he didn’t want to fly me alone. The best thing I could do was fill the airplane and go along, so that’s what I did!” she said.

With this service being the only wheel-based air charter on the Sunshine Coast, Fly! Coastal considers itself as having a niche among the other companies, but believes they still have a common goal. “I think we’re synergistic in that we’re all interested in creating awareness in the community to the merits of flying as opposed to taking the ferry for example and whether it be Sunshine Coast Air, Harbour Air or us, it’s a common thread” said Greg. “Fly! Coastal has no scheduled air service and yet we fly on time”.

2018-10-31
The Local Weekly
Share !
Previous: Does your small business need a boost?
Next: Make the move towards differentiated leadership