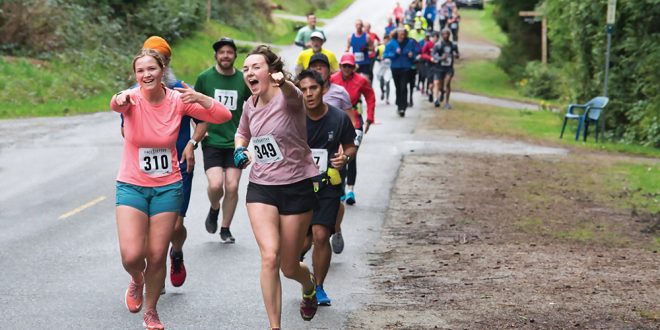 They are running uphill, in the middle of a half-marathon, but they still have the energy to signify just how much fun they are having. Virginia Nikkel, left, and Jill Sader, both from Langley were among more than 550 entrants in the “BMO Sunshine Coast April Fool’s Run presented by Eastlink” on April 7. The 21.1-kilometre route took them from Park Rd. in Gibsons to Mission Point at Davis Bay in good running weather. The overall winner of the 42nd Fool’s Run was Chris Napier of Vancouver, with a time of one hour, 13 minutes and 50 seconds. Said Napier: “I love the fact that you can’t settle into a rhythm at any point on the course and you constantly have to assess your effort.”  The top Coast finisher was Jordan Maynard of Gibsons, with a time of 1:18:29, just four seconds ahead of Nick Duff, of Sechelt.  The overall female winner was Kendal Paul, of Vancouver, with a time of 1:26:05. “The challenging bits were made easier by the smiling volunteers and spectators every step of the way,” Paul said later. And the top female finisher from the Coast was Carlin Goos, of Gibsons, at 1:28:35.  As far as we can tell, a fun time was had by all.  Full results at foolsrun.com. Keith Dunn photo