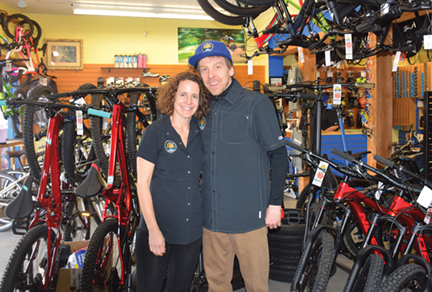 Free-wheeling on the Coast

Like mountain bikers trying out a new trail, Gary Jackson and Lydia Watson found themselves staring down a hill that could have led to a nasty crash or a thrilling ride. They took the ride.

It’s a ripe analogy for this couple. Because now, more than 10 years later, the owners of Off the Edge Bike Shop can look back at that decision as the best they could have made.

“Running a bike shop was a good risk based on my experience,” said Jackson. Well, recreational experience, perhaps, but not professional.

Jackson had been riding bikes on trails since toddlerhood, but strictly for kicks. By 2007, then in his late 30s, he was still riding, but had developed a career in construction management. Then came the proverbial fork in the road, or trail.

“We were living in Lynn Valley and were starting a family, but we were priced out [for a home purchase] on the North Shore. We knew Capilano College was here on the Coast, and there was a chance that things could work out for Lydia there,” Jackson said.

Watson applied for a teaching position at the school [now Capilano University.] She got it, and now is the coordinator of the Sunshine Coast Initiatives Department, and an instructor in the Faculty of Business and Professional Studies. She also puts in hours at the family firm.

How the Sechelt business came into their hands was “serendipity,” said Watson.

“Gary had been biking up here for years and so he had a relationship with Brad and Lorraine Proctor, who owned the On the Edge bike shop, just around the corner on Cowrie Street,” Watson recalled.

“We had family here and we came up in the summer of 2007 for a holiday, and to search for a place to live. We walked into the store and the Proctors asked us, ‘Do you happen to know anyone who might want to take this over?’ Several months later, we owned it.”

As much as it looks now like it was all meant to be, there were real risks at the time.

“The industry was really small when we came up. And I mean, how often do you say, ‘I’m going to totally change my career and move to a new town and buy a bike shop,’” said Jackson. “But we have to give all the credit to Brad and Lorraine Proctor. We wouldn’t be here without them. They’ve been very supportive, and we’ve been very lucky.”

Lucky indeed. How about buying a bike shop and then soon after, watch as a world-class mountain biking facility opens in your community. Coast Gravity Park, on Sechelt Inlet, has become an international tourist destination and, of course, a nice slice of Off the Edge’s business.

“We have now become the exclusive rental provider for Coast Gravity Park,” Jackson said. “We have a strong collaborative relationship with them, handling all of their rental and all of their service needs.”

While they also rent bikes to non-mountain biking clientele, rentals—including the Coast Gravity Park component—still generate less than 10 percent of their revenue. The bulk of business is from repairs and sales.

How much would a bike from Off the Edge set you back?

“The price ranges from above $600 to… unimaginable,” said Jackson with a laugh.

On the repair side, the shop has a 30-year bike mechanic among its six employees, and Jackson himself is certified by the United Bicycle Institute in Oregon.

A growing part of the market is electric bicycles, and Jackson and Watson are on top of it.

“We’ve devoted 15 percent of our floor space to e-bikes,” said Watson. “We anticipate double-digit growth for them for the next decade. It’s a category that appeals to 50- and 60-somethings with a few extra bucks, so it likely will explode here, based on the population makeup of the Coast.”

The bike business tends to be summer-seasonal. It’s doing well, but that’s not the whole point, Jackson said.