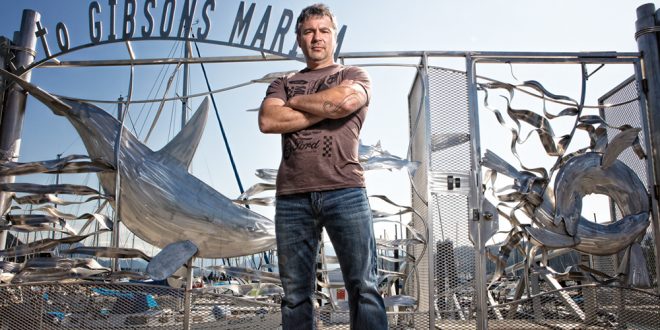 From Roadhouse to your house

While growing up Ashley Odd saw his father working his magic in welding and shaping car metal as an auto body specialist. Seeing the creative potential in working with metal stuck with him and in high school he chose a shop course in welding. He then completed a comprehensive welding program at Dawson Creek’s Northern Lights College, called B.C.’s Energy College. 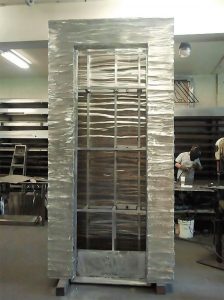 Odd began his metal fabrication career working for companies in Calgary and Vancouver welding what he said were basically the same sorts of things most of the time. “Eventually I got tired of welding what others wanted; I wanted to weld things I created,” he said. So in his spare time and on weekends he fabricated his creations, some of them “crazy”, yet all contributing to his understanding of metal and its potential.

In 2015, he and his wife, Sherry, moved with their two daughters to the Sunshine Coast where in a Wilson Creek industrial complex he started Roadhouse Kustom Metals & Design. Odd is now on a fast track designing and fabricating metal products for clients ranging from homeowners, interior decorators, designers and architects, to builders and others in the industrial and commercial sectors.

In Odd’s shop are bins and racks of metal in a variety of shapes and sizes. Then there’s the tools of the trade: three types of welding machines (gas metal arc welding, tungsten arc welding, and shielded metal arc welding), a shear, a press brake, slip rolls, a band saw, a plasma cutter, and a tube bender. A spot welder is on the buying list.

Regarding the materials he uses, Odd said he’s committed to using alternative, recycled or recyclable metal. “I’m typically about being as green as possible, so I buy as much recycled metal as I can get, usually steel, my primary fabricating material. The metals I use most are steel, aluminum, stainless steel and copper,” he said.

The Roadhouse website provides a look at just a few of Odd’s creations: a polished-steel fireplace surround, stair and landing railings, kitchen islands, a wall sconce, wine racks and more, all showing imagination in form and function. Particularly stunning is the dynamic ripple-effect aluminum
panels on 10-foot-high water feature, a commissioned piece done for an architect. 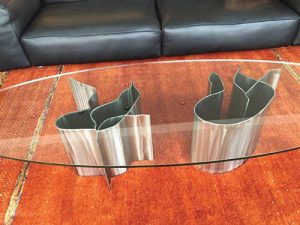 Surprisingly, this unique piece required the least hi-tech approach. Odd described how he achieved the ripple effect: “I laid a full sheet of 5- by 10-, 16-gauge aluminum on a series of different-size round steel bars I had welded to a large sheet of steel. Then I drove back and forth over it with my forklift. I skewed the aluminum in different angles and drove over it some more. After that I squared it up, cut it to the sizes I needed and welded it together.”

The Roadhouse brand has increasingly made a name for itself, with orders coming from as far away Los Angeles, New York, Toronto, Chicago and Palm Desert. Odd outlined that orders are typically for stylish, mostly-metal kitchen tables and coffee tables, stair cases both straight and spiral, chandeliers, wall sconces and other decor items for homes and businesses. “Many of the orders are from architects and designers buying for their customers,” he said.

None of what Odd produces is done because it’s easy. In fact he likes to take on the toughest challenges. His largest project to date, and the most difficult to move, is the imposing portal at Gibsons Marina commissioned by marina owner Klaus Fuerniss and unveiled in September 2015. It measures 12 ft. at its highest point and is 20 ft. wide. Getting it to the marina was a story in itself.

The entire piece was fabricated of hand-formed aluminum, two sheets welded together with rounded edges and all of it polished to a smooth finish. Details show on both front and back. The central figure is a killer whale seemingly leaping into the air while subtly supported by such components as waves and kelp. Salmon and smaller fish are also seen. Completing the layout is the gate that shows a seal and sea lion frolicking in waves. The commission’s challenge to Odd was to create a composition with marine images evocative of the food chain of the ocean. Odd’s artistic interpretation became the spectacular statement people enjoy today. 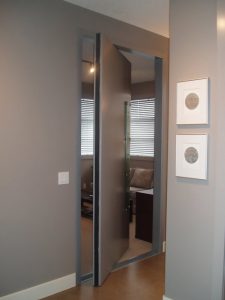 “I like the difficult jobs, the ones others avoid,” Odd explained. In Odd’s case, he’s the only person who does the work. He said his wife, Sherry, will provide help if needed, but her job is primarily being bookkeeper, as well as wife and mother.

Odd’s energy and dogged determination is undoubtedly the same thing that spurred him on in his kickboxing career. He began competition in 1990 at the age of 20 and six years later he won the Canadian Lightweight Kickboxing championship. By the time he retired in 2003 at age 33, he had won five titles, including Golden Glove and the 2000 WKA World Super Lightweight Pro Am Kickboxing Champion.

These days Odd’s customers are increasingly commissioning him for many one-of-a-kind pieces that push the boundaries of his imagination and craftsmanship. He said if they can get the image of what they want into his head, he can create it.

Among the larger items fabricated are stainless-steel pivot doors, some of them 8 or 9 ft. tall and 4 ft. wide. Others have been as much as 10 to 12 ft. high, 5 feet wide, 3 inches thick and weighing from 1,000 to 1,200 pounds. Odd also fabricates and installs the pivot hardware that supports the doors and upon which they turn.

He said the doors are made for a special kind of house where the owner wants his entranceway to make a statement, “and they make a huge statement.”

A recent new commission is a woven-aluminum fence 8 ft. high and 24 ft. long, wired for lights. Other large items fabricated include fireplace surrounds with the customer’s choice of finish. The metal can be textured to look like wood, stone or a number of other finishes. Odd said it can be as complicated as is wanted, but it should show character and clean lines.

When asked what excites him about his work, Odd said, “It excites me when I turn my designs into usable art that people enjoy. I love seeing my clients’ excitement and emotion.”

As for his plans for the future, he said he expects continued growth from a broadening client base as he presses forward, inspired by his mantra that are the words of American architect Samuel Mockbee who challenged his graduating students with these words: “Proceed and be bold.”