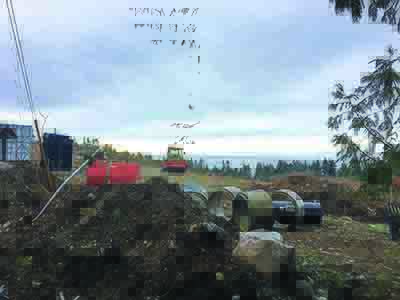 Statements of disbelief came from Gibsons’ council members at their Jan. 5 meeting in the discussion of a Stop Work Order for illegal tree cutting at the Gospel Rock development and sharing of details surrounding that event.
While not a business item on the meeting’s agenda, the subject came up during council reports. Chief Administrative Officer Emanuel Machado explained that the order was issued on Dec. 21. It was issued in response to what appeared to be the cutting of trees in a protected area. He said that on Jan. 5, the Town received a Registered Professional Biologist’s report on the incident, including recommendations for next steps. That revelation led to requests for a copy of the report and additional information during a meeting public inquiry session.
A number of questions came from Sunshine Coast Conservation Association (SCCA) Executive Director Suzanne Senger. These focused on requests for full information disclosure and on Town measures to ensure the developer honours commitments to protect sensitive areas. The SCCA and the Land Conservancy of BC are partners with the Town and the property owner Greenlane Homes on the administration of environmental protection covenants registered to the land. About half of the 47-acre site is to be protected as parks and open space. The company has plans for a commercial and residential development, including an estimated 360 living units on the remainder of the property.
In an email to the Local on Jan. 11, Senger stated, “The SCCA was informed of tree removal in the sensitive forested area on Block 7 by citizens of Gibsons on Dec. 31. We attended the site on Jan. 2 and 3 and documented the cutting. SCCA staff called and spoke with Town staff on Monday, Jan. 4. Through phone calls, we learned that the tree cutting took place on Dec. 18 at the recommendation of the owner’s environmental professional, Diamond Head Consulting. We also learned that the Town did not issue a tree cutting permit under the Tree Preservation Bylaw, which was adopted on Sept. 19, to allow this cutting.”
Councillors Stafford Lumley and Annemarie De Andrade, as well as Mayor Bill Beamish, asked that the available details be made public as soon as possible. Town staff advised that the requested documents could be released through a Freedom of Information request. Senger objected, noting that process could take up to 90 days to have the paperwork provided. Staff also suggested that the SCCA, which has a relationship with the developer, could get the information from that source.
The Town issued a press release related to the order on Jan. 6. The release details that “at a site meeting to discuss future tree-cutting, staff noticed that two trees in the lot’s designated conservation area had sustained minor damage during earlier tree removal. We also discovered that a buffer zone at the edge of the protected area had been surveyed and flagged at five metres, instead of the 10 metres stipulated in the development permit. As a result, at least one tree may have been felled in the buffering root protection zone. Among the Town’s conditions for issuing the Block 7 DP were that an environmental monitor always be present on-site to oversee tree removal and that no disturbance of trees occur in the root protection zones of the Environmentally Sensitive Areas. As these two conditions had not been met, a Stop Work Order was issued immediately.”
The release states that the Stop Work Order will remain in place “until the Town is confident that measures have been put in place to ensure that no similar incident occurs in the future.”
Connie Jordison