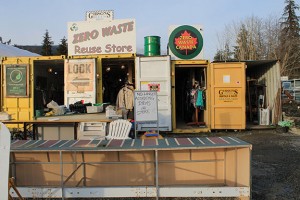 The operators of the Gibsons Recycling Deport are closing the Zero Waste store, and giving away the remaining inventory until Jan. 15. Donna McMahon photo

“We’re in a tough transition,” says Barb Hetherington of Gibsons Recycling Depot (GRD). The award-winning recycling depot, operated by Hetherington and Buddy Boyd, announced on Jan. 1 that it is suspending a number of its programs and closing the Zero Waste Store as of Jan. 15.

The property on which the recycling depot operates has been sold to an undisclosed buyer. GRD has a lease on the property and Hetherington says that their new landlord is receptive to extending it, but Hetherington and Boyd are ready to move on. Their recycling business is up for sale.

“There have been no holidays–recycling came first–so we’re shifting so that we have lives,” said Hetherington. “We have not made a retirement fund, so we will be looking for part-time jobs that use the skill sets that we have.”

The service cutbacks will result in some layoffs. “What we really tried to do is keep as many people as we could,” said Hetherington. “Unfortunately there are some people that we will have to be letting go.”

Gibsons Recycling Depot will continue to collect materials covered under the Multi Materials BC (MMBC) program until their contract with the Sunshine Coast Regional District expires at the end of November, 2018. They will accept basic household recycling items including cardboard, glass and plastic containers, batteries, paint, small appliances, electronics, books and styrofoam. The depot will also continue to take food scraps for composting, and their seven-day-a-week hours remain unchanged.

However, they will not take additional items such as major appliances, metal, wood, printer cartridges, textiles, furniture and tires.

Hetherington said that many of the items they have dropped are simply too expensive to handle. Even where Extended Producer Responsibility (EPR) programs are in place–such as for thermostats, smoke detectors, oil and antifreeze–subsidies do not cover the real costs of handling. This is particularly a problem on the Sunshine Coast, since almost everything has to be shipped off coast by truck and ferry.

Unless a buyer for the recycling business can be found, the future of recycling services in the Gibsons area is uncertain.

“It breaks our hearts to see the possibility of something that we worked so hard for disappearing,” said Hetherington. “We really believed that zero waste is possible in our community, but basically we’ve gone as far as we can go alone in it and it’s now time for others to step forward.

“The community needs to come together and make it happen.”

The contents of the Zero Waste Store are being offered free until Jan. 15.