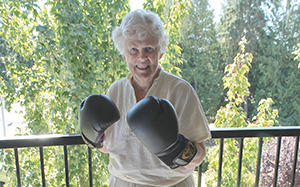 Posted by: The Local Weekly September 13, 2017 in Uncategorized Leave a comment 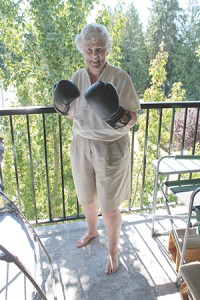 Sechelt resident Sue Jackel never imagined that at age 75 she would take up the sport of kickboxing.

But Jackel, who was diagnosed with Parkinson’s Disease six years ago, read an article about a program called Rock Steady Boxing for Parkinson’s patients, and then four years ago she saw a demonstration at a Parkinson’s conference in Montreal.

Kickboxing trains people in coordinated movement, balance, and strength, all of which are extremely beneficial. “It’s a treatment, not just an entertainment,” said Jackel. “I thought: yes!”

Parkinson’s is a degenerative disorder of the central nervous system that progressively impairs movement and balance. Roughly 13,000 BC residents are living with the condition, with twice as many men as women affected. Most are diagnosed in their 60’s. There is no cure, although medical treatments can combat symptoms and slow the progression. 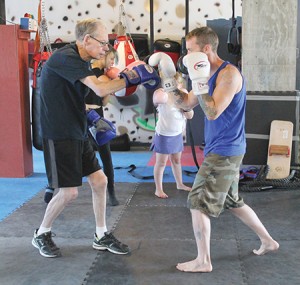 Jackel approached Dave Hollett, who runs Hollett’s Kickboxing Academy, and asked him if he’d be interested in running a class for people with Parkinson’s. Hollett researched the condition and said yes. He now has 10 participants who attend his program in Sechelt on Monday, Wednesday and Friday mornings. Most are accompanied by their spouse. Jackel is the only woman, and the only one who is single.

Hollett, who moved to the Sunshine Coast from Alberta two years ago, has been involved in martial arts for 30 years. He put together a program of exercise designed to increase dopamine levels, and improve motor skills, mobility and balance. He also involved a nutritionist who creates menu plans specifically targeted at Parkinson’s symptoms.

As the participants start into their morning exercise routine, they gradually become more animated and engaged. “At first when they start they are stiff and sore,” says Hollett. But after 10 or 15 or 20 minutes they get happier, get moving.”

Jackel says: “People smile for the first time that day or that week.”

She adds: “You also get to work out your aggressions. It’s very liberating.”

Jackel has nothing but praise for Hollett, who she describes as personable and relaxed. “He was willing to give it a try and now he’s sold on it,” she said.

Hollett plans to start another Parkinson’s group based in Gibsons, and also has plans to launch general classes for seniors who do not have any particular health condition.

The Sunshine Coast Parkinson’s support group currently has about two dozen members. They are holding a public meeting on Thurs. Sept. 21 from 10:15-11:45 am with special speaker, psychiatrist Dr. Marius Welgemoe, at St. Hilda’s church in Sechelt. Everyone welcome.