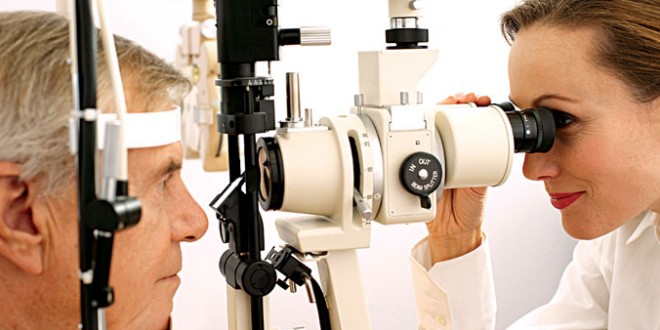 Glaucoma is common but treatable

Regular visits to an eye doctor for an examination and glaucoma test can help keep your eyes healthy in the future.  Photo submitted

Many people expect some moderate loss of visual acuity as they age. Though some people can go a lifetime with 20/20 vision, many do need prescription eyeglasses as they age or get stronger prescriptions if they already wear glasses.

Glaucoma is one of the more common vision issues men and women face as they age. Though anyone, including newborn babies, can get glaucoma, older people are at a greater risk. The Glaucoma Research Foundation notes that glaucoma is a leading cause of blindness, and roughly 10 percent of people who receive proper treatment will still experience vision loss. Because it is so prevalent, glaucoma is something men and women should familiarize themselves with so they’re more equipped to recognize its symptoms and seek treatment, which is highly effective, as soon as possible.

Glaucoma is not a single disease but the name used to refer to a group of eye diseases that damage the optic nerve. Damage to the optic nerve can eventually lead to loss of vision.

How does glaucoma develop?

Are all glaucomas the same?

There are three types of glaucomas, and each has its own set of symptoms.

Open-angle glaucoma: The most common form of glaucoma, open-angle glaucoma occurs when the optic nerve is gradually damaged. Eyesight will be slowly lost, and one eye may be more affected than the other.

Closed-angle glaucoma: When a person has closed-angle glaucoma, which is somewhat rare, the iris and the lens block the movement of fluid between the chambers of the eye, causing pressure to build up as the iris presses on the eye’s drainage system.

What are the symptoms of glaucoma?

The symptoms of glaucoma vary depending on the type. Vision loss is the only noticeable symptom of open-angle glaucoma, and that vision loss is likely to affect peripheral vision, which may not be noticeable until it’s severe because the healthy eye will make up for the loss. By the time sharpness of vision is affected, significant vision loss has likely occurred.

Closed-angle glaucoma may cause mild symptoms or no symptoms at all. When symptoms do appear, they tend to do so in short periods that occur in the evening and disappear by morning. In some instances, symptoms can be severe and will require immediate medical attention. These symptoms include sudden and severe blurring of vision; severe pain, either in the eye itself or the surrounding areas; redness of the eye; nausea and vomiting; and possibly coloured halos around lights.

Symptoms of congenital glaucoma may be present at birth or develop as a child becomes a toddler. These symptoms may include watery eyes, sensitivity to light, an eye or eyes that appear cloudy and eyes that appear larger than normal because the eyeballs have enlarged due to pressure.  If a child is observed frequently rubbing his or her eyes, squinting or keeping his or her eyes closed much of the time, they may be experiencing congenital glaucoma, and should be examined by an eye doctor.

To be confident your eyes are in good shape, plan to make an annual appointment with an eye doctors for a regular check up and glaucoma testing.

Tagged with: Glaucoma is common but treatable