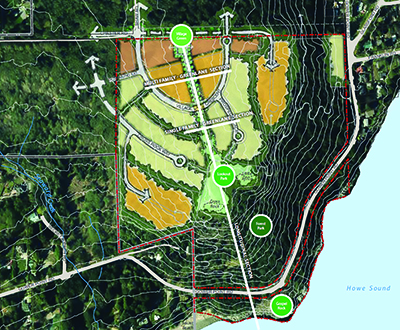 Gospel Rock and other chairing challenges

Mayor Bill Beamish faced a bumpy debate that began with the call to order at Gibsons’ March 16 council meeting. Councillor Annemarie De Andrade moved to make an addition to the amended meeting agenda for an update on the environmental protection covenant on the property at Gospel Rock. Beamish reminded her of the process for placing business items on the agenda. Those include submitting items a week in advance. As meeting chair, he allowed De Andrade’s motion to proceed to a vote, which passed, with councillors Croal and Lumley in favour.

During the item’s discussion, Beamish put a stop to extended questioning by De Andrade related to tree cutting licences issued by the Town to the Gospel Rock developer. He advised the councillor that she was stepping outside of her role and that interrogation of staff in open meetings would not be permitted. De Andrade stated, “I just want a straightforward answer which I am not getting.”

Beamish explained that he had made an offer for all parties involved in the Gospel Rock covenant and environmental protection area to meet to resolve a number of details. Councillor Stafford Lumley requested he be involved in this meeting. As of March 22, Mayor Beamish confirmed that the Sunshine Coast Conservation Association (SCCA) and The Land Conservancy of BC had accepted the invitation, and Councillor Lumley was to be included. The Town was awaiting confirmation about the meeting from the
developer.

During the inquiries session at the end of the meeting, SCCA Executive Director Suzanne Senger thanked council for having the discussion in public. Senger stated she was pleased to see that council members are clear on the commitment to protect all of the dry land forest area at Gospel Rock.

Senger noted that her group, which is a party to the covenant, is also in negotiation with others, including the Ministry of Transportation and Infrastructure, related to a waterfront issue in the development area. This relates to subdivision approval and a requirement of the Land Title Act to provide access to water to subdivided properties.

A further divergence of views on council roles came to light at the meeting in discussions on the hiring of new staff and options for a Town organizational performance review. During an earlier debate at committee, both actions were recommended. At council, a motion to hire for a new corporate services position did not make it to a vote. That $35,000 item will not be included in the 2021 budget without further committee discussion.

The recommendation that staff report back on a potential performance review was endorsed. That was done despite disagreements on how the project should proceed. Beamish, whose background includes over 40 years in municipal administration, cautioned council about the cost of such a project. While he was serving as Sechelt’s Chief Administrative Officer in 2014, a similar review cost in the $150,000 range.  Lumley expressed the view that there must be a “cheaper alternative.” De Andrade noted that she had scanned information on staffing levels of other similar-sized municipalities that had lower numbers of employees than Gibsons. Beamish advised council members to avoid “doing their own research” on such matters. His opinion was that when a staff report is requested, council should allow the professionals on the municipality’s payroll to do the work. Beamish said it was not council’s role to undermine those efforts by doing side investigations or by placing excessive conditions on the assignment.