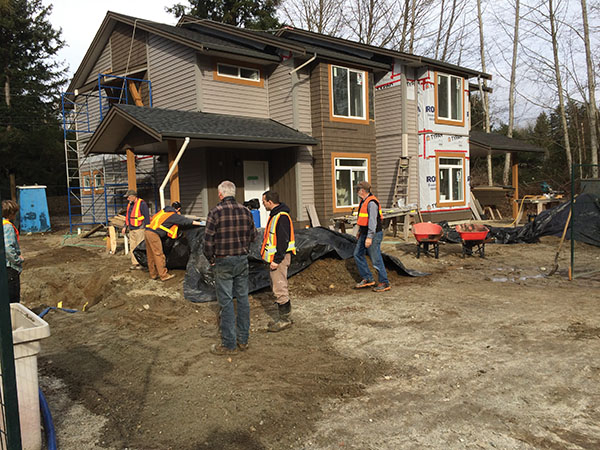 Posted by: The Local Weekly March 29, 2017 in Business Magazine Leave a comment 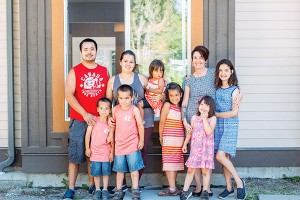 Habitat homeowners, Ken and Rebecca Nelson and Zara Gale and their children. Photo Courtesy of Habitat for Humanity

It’s the smile on the faces of all the participants that you notice. The joy they feel knowing they have lifted a family out of the cycle of endless rent and poverty and moved them into their forever home. It has happened nine times on the Sunshine Coast and two more homes are nearing completion, changing forever the fortunes of two more young struggling families.

For Rebecca Nelson, her husband Ken and their four children what Habitat for Humanity volunteers have done for them has been a blessing, a dream come true. “It is nice knowing you are paying to own and we can stay here as long as we want. Its our forever home” says Rebecca. “It has put us in a better financial position and we are able to provide more amenities for our children, dance classes, baseball and soccer, like all the other kids. We now save money every month. It is pretty amazing.”

Since its incorporation 13 years ago, the Habitat chapter on the Sunshine Coast and its many volunteers have been dedicated to building homes and giving hope to struggling young families and giving them the security of home ownership. It is an ambitious goal with a stellar record of achievement. In the last three years, the nine BC chapters have built 27 homes. Sunshine Coast Habitat volunteers have built six of them, more than 20% of the total.

The new homeowners who have been rescued from the cycle of rent, unlike conventional home buyers, are not required to post a down payment, but they do pay in a unique way. Every Habitat family must donate 500-hours, 62 working days, 12 weeks of their time volunteering without pay, doing their part to move Sunshine Coast Habitat closer to its goal. It’s called sweat equity, an unconventional approach to building equity in your new home. (Habitat believes that access to safe, decent and affordable housing is a basic human need that should be available to all.)

The duplex homes volunteers build in Habitat’s Wilson Creek Village are valued at the current appraised market value. The mortgage qualifying formula is like no other. The family income of the qualifying family is based on a scale according to family size. Habitat holds the mortgage and the mortgage payment is based on 25% of the family net or gross income from the previous year’s tax assessment. Habitat divides that amount by 12 to get fair and manageable monthly payments. The mortgage goes up and down depending on the new owners latest year income tax assessment. 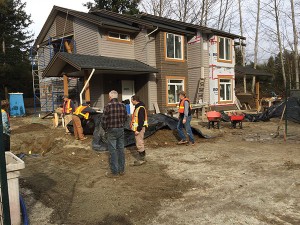 Volunteers working on site. Photo Courtesy of Habitat for Humanity

Cori Lynn Germiquet is Habitat’s Executive Director, just one of a half dozen paid employees. She comes to the Sunshine Coast from a career in economic development. “We help people who will never get out of the cycle of rent. They have to establish they need to improve their quality of life. They must have no criminal record, be employed and have the ability to pay.”

Its a success story built on generous donations from community residents and income from Habitat’s Restore and recycling operations.

Restore like the home building side of Habitat is largely run by its dedicated army of over 60 devoted community volunteers.

Restore re-sells donated furniture, household and business items. When they sell, the donors get tax receipts. Restore and the recycling operation raise almost $700,000 a year. Half of it goes directly towards building new homes and the other half pays salaries, rent, insurance and the operation of Habitat’s trucks. Restore will be approaching Port Metro Vancouver in the hopes of convincing the giant Port Authority to allow us access to containers of unsaleable merchandise to its Sechelt store and other affiliate stores around Metro Vancouver. These are goods that would normally be destroyed. Habitat is hoping to sell the unused items to raise even more funds to build homes.

“The philosophy is more volunteer driven” says Germiquet. “It is amazing, our financials and balance sheet are very strong. The future is bright. Politically people have to take note and rather than spending all their money in Metro Centres, take a closer look at what is happening in rural BC such as the Sunshine Coast. Our goal here is to build as many homes as we can. You see young people who want the best for their families. Its emotional to see that we are giving them a future and a place for their children to grow up. We have 30,000 people on the Sunshine Coast and they know if they help us, bringing us goods to sell, they are helping others in their community.” 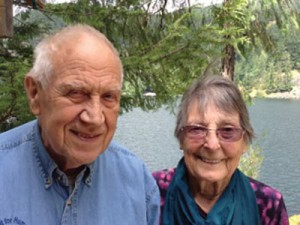 Ed and Gwen Hawkins realized the power of positive thinking when they set up Habitat Sunshine Coast back in 2004. They wanted to do something for their community and they have been there with financial and volunteer support every step of the way. Habitat Canada at first resisted because head office thought Sechelt was too small, but the Hawkins knew their community and its generous residents would prove them wrong, and they did. Habitat Sunshine Coast has proven year after year with Ed and Gwen and its nine volunteer directors at the helm to be one of the best and most generous Habitat for Humanity chapters in any country.

Sean Whalen manages the home building site. “I get a great deal of satisfaction seeing the smiles on their faces when they move into their new homes. You know you are making positive changes in their lives.”

Habitat Village, in partnership with SD #46 and Vancouver Island University, is also a school for grade eleven and twelve students who want to pursue a career in the building trades. In an on-site classroom, students get theory and on-the-job training helping to build the homes for the young families. This is a University level course where students get apprenticeship training and first year university credit. Carl Brownstein has been the instructor for five years of the eight years the program has been running. “I love working with the kids. They leave here and they get jobs. It is a perfect partnership that is community minded.”

Zara Gale is a single mom who moved into the village with her two young daughters. Her children, Lucia and Miranda are two of 16 kids under eleven years old who live and play in the Habitat Village. “This has been an opportunity that has pulled us out of poverty. We were renting and it was taking 70% of our income. The 500 hours of sweat equity has been a real commitment, a real example of community building. The stability of the program has taken the stress from me and that reflects on my children.”

Habitat for Humanity is now helping young families obtain home ownership in 100 countries. On the Sunshine Coast its many volunteers are committed to building affordable housing and restoring dignity to the lives of the hard working poor families on the coast. When it comes to performance, the Sunshine Coast Habitat and its volunteers certainly punches above the belt. Not bad for the smallest per capita Habitat for Humanity in Canada outside of the Northwest Territories.