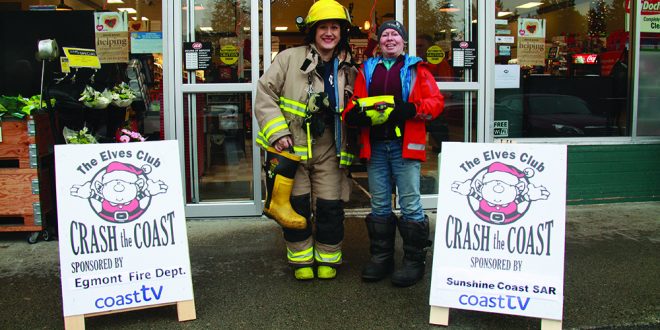 First responders all along the Sunshine Coast were helping Santa Dec. 8 by collecting cash for the Elves Club, money that will be distributed to needy families.  Here Annette Sheppard of the Egmont Fire Dept., left, and Sue Duxbury, from SC (Land) Search and Rescue, were collecting at the IGA shopping Centre in Madeira Park.  The money was delivered to the Elves Club telethon broadcast on Coast TV from the Heritage Playhouse in Gibsons, where some people brought in their own donations. When it was all added up, the total came to $27,679, which will be distributed in gift certificates. People receiving the certificates had to register by Dec. 11, and will pick up the certificates on Dec. 15 at pre-arranged churches.  The Elves Club was taken over this year by RE/MAX City Realty in Gibsons.  Steve Sleep photo

2018-12-12
The Local Weekly
Share !
Previous: Tsunami preparedness on the Sunshine Coast
Next: A race to drill water wells