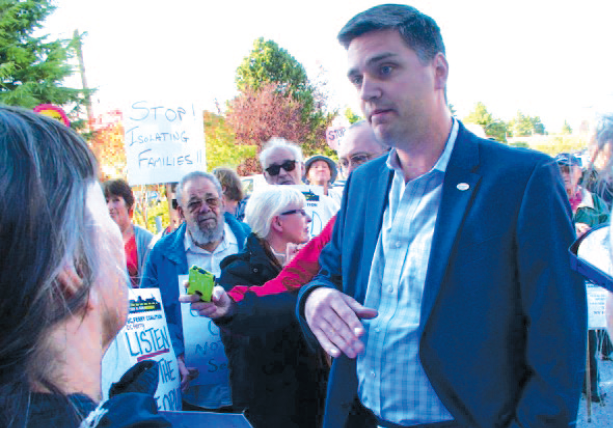 Posted by: Admin October 8, 2014 in Front Page Leave a comment 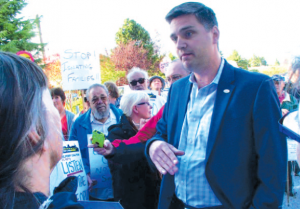 BC Ferries fares will still be going up again before they ever go down, despite the acknowledgement that high fares are the “single greatest contributing factor” to reduced ridership on the ferry system, B.C. Transportation Minister Todd Stone told a Sechelt business gathering.

Stone, who debated briefly with a placardwaving crowd of about 30 protesters outside the Driftwood Inn Sept. 30, reminded a Sechelt Chamber of Commerce function inside that fares will be going up an average 3.9 per cent next year, but also promised no further service reductions and said he was confident fares will eventually go down.

He said he was the first B.C. transportation minister to admit high fares had hurt ticket sales, but added that any hope of reducing fares by bringing the publicly owned but independent Ferries Corporation back into the transportation ministry was not going to happen any time soon.

“We can‘t do it for this simple reason–Ferries has a debt of $1.25 billion,” said Stone.

Credit-rating agencies have warned that consolidating the Ferries debt with the provincial debt would result in an immediate downgrading in B.C.`s credit rating and an increase in borrowing costs, the minister said.

“Which would mean hundreds of millions of dollars less for health care, education and, indeed, Ferries,” he said.

Stone said the solution to Ferries’ debt lies with the government’s plans for a Prosperity Fund, to be fueled by a projected $1 trillion economic boost from the liquid natural gas industry.

“Understand that our number-one priority with that Prosperity Fund is to eliminate the BC Ferries debt,” he said.

Stone, the MLA for Kamloops-South Thompson since the 2103 election, admitted that the government’s expectations of an LNG windfall have been questioned, but said, “You will see final [LNG] investment decisions made in the coming months.”

The minister also invoked the potential of LNG for ferries themselves. He said three ferries now under construction, one of which will service the Powell River-Comox route, will be capable of running on cheaper and cleaner-burning natural gas, and that the fleet’s two largest ferries would undergo duel-fuel conversions.

Stone made no direct reference to the Union of B.C. Municipalities report last month, which concluded that higher fares had driven ridership down by 11 per cent and cost the provincial GDP at least $2.3 billion between 2003 and 2013. The minister had issued a statement after the UBCM report’s release, calling its analysis “highly simplistic.”

“The minister uses every possible misleading argument and industry buzz-words to distract from the report’s findings,” Simons wrote on his website.

Stone also told the Sechelt business group that he’d lobbied the federal government about Transport Canada crewing requirements, which are punishingly expensive for the ferry system. “It is nonsensical that a short commuter run in British Columbia has five or six times the crewing requirement of a similar run in Washington state.”

Stone noted that his ministry is “vigorously pursuing” the concept of fixed links and has announced a feasibility study into a bridge from the mainland to Gabriola Island.

“A fixed link to Gabriola Island would be less costly over about a 50-year period than continuing to provide ferry service.”

Stone also said he liked some of the plans he’d seen for expansion of the newly-renamed Sunshine Coast Regional Airport, saying the facility had “huge potential.”

Although he made no funding commitment, Stone said he would be sure the province is, “at the table along with our federal partners and the local communities here to help take your airport to the next level.”