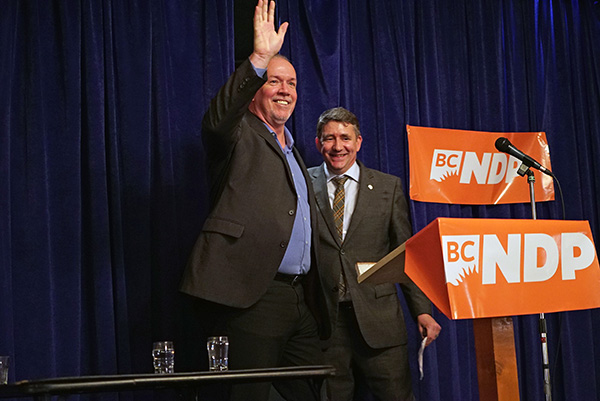 Under-funding of education in BC is a key opportunity for the NDP, according to NDP provincial leader John Horgan, who visited the lower Sunshine Coast on Oct. 16 to speak to an NDP fundraising luncheon.

In response to a pointed question from School District 46 board chair, Betty Baxter, Horgan emphasized the NDP’s strong support for education.

“Stable, secure, predictable funding is what school board trustees need,” Horgan said. “The advantage of the random acts of funding that we’ve seen from the Liberals recently is that it’s just pissing people off.”

He noted that the Liberals had characterized recent administrative cuts in education budgets as “low hanging fruit.”

“In my district the School Board trustees said ‘we cut the low hanging fruit; we cut the orchard down to heat the schools because you weren’t giving us enough money for that.’ There’s no fruit to be had here.”

A crowd of approximately 80 party supporters attended the $100 a plate luncheon at Roberts Creek Hall.  Horgan was introduced by MLA Nicholas Simons, Chief Calvin Craigan of the Sechelt Nation, and Bill Forst, President of the Sunshine Coast NPD Constituency Association.

Horgan was first elected in 2005, and represents the Juan de Fuca riding. He became party leader in May 2014.

The first issue that Horgan addressed was electoral reform.

The NDP’s nomination meeting for the Sunshine Coast riding will be held in Powell River on Oct. 22. Incumbent Nicholas Simons has no challengers for the party nomination.