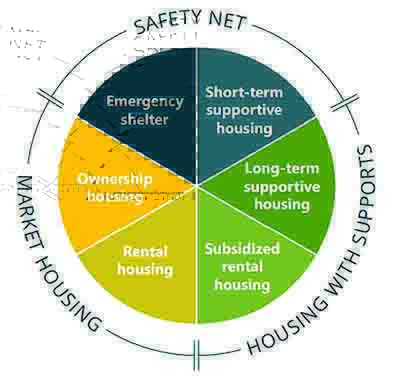 Gibsons is on track to be the first area local government to look at suggestions for improving housing affordability. The Sunshine Coast’s Housing Needs Report Implementation Framework is on the agenda for this week’s planning and development committee meeting.
The report, drafted by consulting firm Urban Matters, is a follow-up to the Sunshine Coast Housing Needs Assessment released in October. The implementation document looks at ways to address gaps between the housing that exists and what residents need. It has been forwarded to Gibsons, the District of Sechelt and the SCRD. The three entities partnered in the sponsorship of the project aimed at resolving what each has referred to as a “housing crisis” on the Coast.
The report has recommendations specific to each of the local governments. These are divided into four categories: plans and regulations, incentives, partnerships, and advocacy. Suggested actions each jurisdiction can take to positively influence the state of housing affordability are provided. These were developed by considering the Coast’s housing needs and approaches used by more than a dozen BC and Alberta communities to address similar challenges.
For Gibsons, the report encourages adjustments to land-use policies, such as pre-zoning locations for future homeless shelter sites, supportive housing, and market rental type developments. It also suggests increasing density through bonusing as well as allowing and providing incentives for the building of secondary suites in more residential zones. Encouraging property owners to maintain housing for the long-term accommodation market instead of using units for short-term rentals is another report suggestion.
Collaboration among the project partners to create a cross-governmental staff position to oversee housing interests throughout the area is another report recommendation. This was included in the list of potential action items for the Town and the other jurisdictions.
The first phase of the project was a needs assessment – presented to local governments last Fall – that pointed out about 2,000 area households were living in unacceptable conditions in 2016. It noted that accommodation affordability further deteriorated in subsequent years. That change was linked to the escalation of similar costs elsewhere in BC.
Both the needs analysis and implementation reports say this situation made buying a single-family detached home – the most prevalent type of housing in the area – too expensive for most median income households. It also contributed to cost increases and availability strains in the housing rental market.
In summing up the state of rental accommodation affordability on the Coast, the most recent project report states, “Between 2016 and 2019, cost of rent nearly doubled in the electoral areas, while it increased by close to 40 percent in the municipalities. In 2016, 40 percent or more of all renter households were living in unaffordable housing across the Coast.” It notes that this situation has resulted in a rise in the numbers housed in spaces that do not meet their needs or being homeless.
Any recommendations on the report from Gibsons’ committee’s review will be forwarded to council for consideration. Council decisions would direct further actions by Town staff on the matter.
Connie Jordison