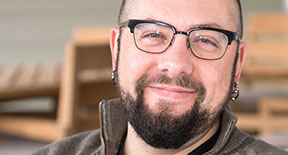 Posted by: The Local Weekly June 14, 2017 in Arts & Entertainment Leave a comment

Author, scholar, teacher, queer, member of the Cherokee Nation. These are just some of the things that help define who Daniel Heath Justice is. He’s also a resident of Halfmoon Bay where he and his husband have settled after four years of living in Vancouver. “We wanted a slower pace where we could know our neighbours and see the stars again,” says Justice. He commutes to UBC where he is a professor of First Nations and Indigenous studies and the Canada Research Chair in Indigenous Literature and Expressive Culture. While in the city, Justice sometimes takes part in the fantasy role playing game Dungeons and Dragons. Yes, Justice is also a gamer. He’s been playing D&D since he was 12, when he created Tarsa’deShae and Tobhi Burrows, characters that “developed and grew along with me,” says Justice fondly. “They’re old friends. I wanted to follow their adventures and tell more stories about them.” The two characters became heroes in his well-received fantasy trilogy, The Way of Thorn and Thunder. While containing certain conventions of the fantasy genre – friends and allies who band together to fight a corrupt and powerful world order – the heroes are not who you’d expect. Justice has taken his personal motto, ‘imagine otherwise,’ and put it into practice. “Fantasy is one of many ways for us to imagine otherwise,” he says. “At its best it gives us the opportunity to imagine a different way of being. It makes space for all different kinds of heroism and talent and possibility.” His trilogy is populated by outsiders, characters considered “other” who have important roles to play in saving their community. “I’m writing for the readers like me, who never saw ourselves in these works,” says Justice. “Or if we saw ourselves, it was always in demeaning, diminished, expendable ways.” 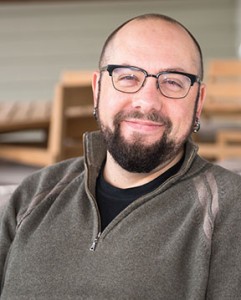 Writer and professor Daniel Heath Justice will take part in Read Out Loud June 17 at the Arts Centre in Sechelt. Craig Cochrane photo

Though Justice knew he was queer from a young age, he didn’t come out until graduate school. “I didn’t embrace it until the funeral of Matthew Sheppard [who was beaten to death in Wyoming for being gay in 1998],” he says.”I realized my silence wasn’t going to protect me.” Justice’s work, both academic and creative, aims at getting people to imagine otherwise, a perhaps subtle, but important vehicle for social change. “I think intersectionality is so vital,” he says. “Not just in our lives, our teaching, and in our work, but also in our creative work.”